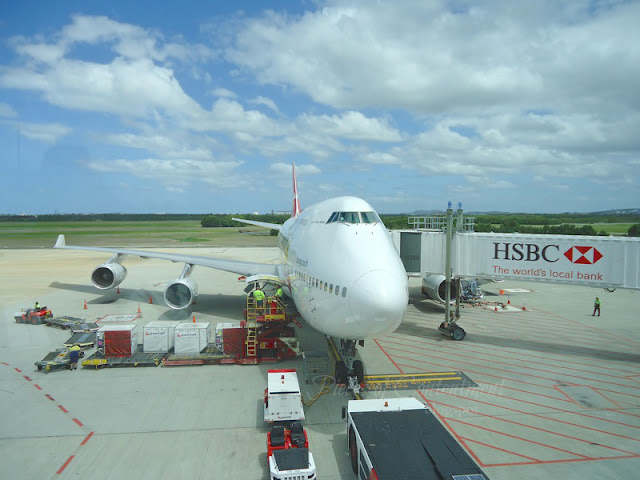 Miss E (20) and my husband arrived home safely from India yesterday afternoon. There has been much catching up and story telling over photos. Let me share their trip over to India to start with. You can read on the story of leaving the team at Brisbane International Airport here. 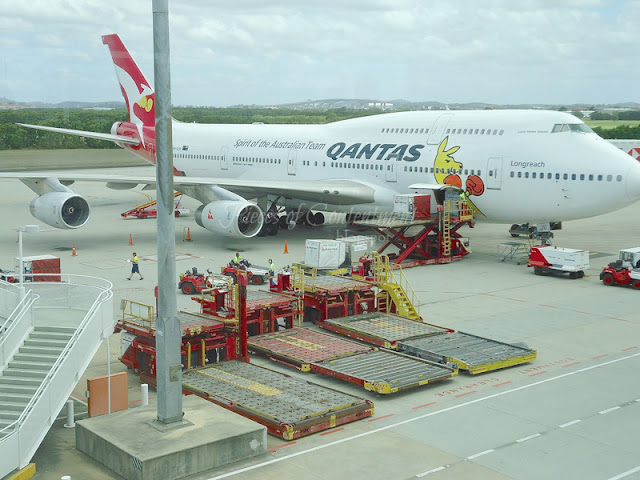 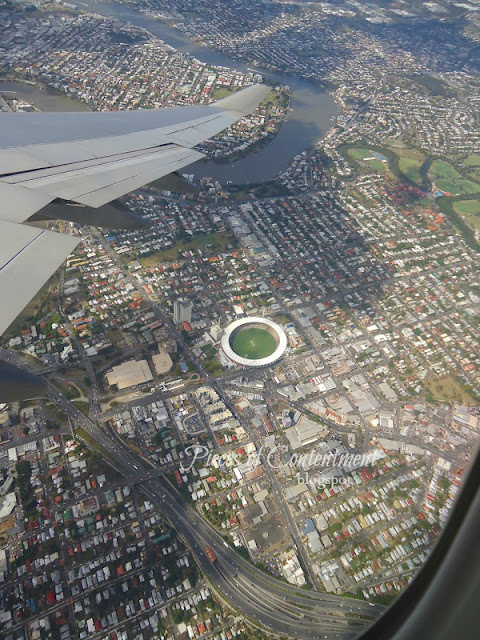 Flying over Brisbane you can clearly see  the Brisbane Cricket ground, affectionately known as "The Gabba". 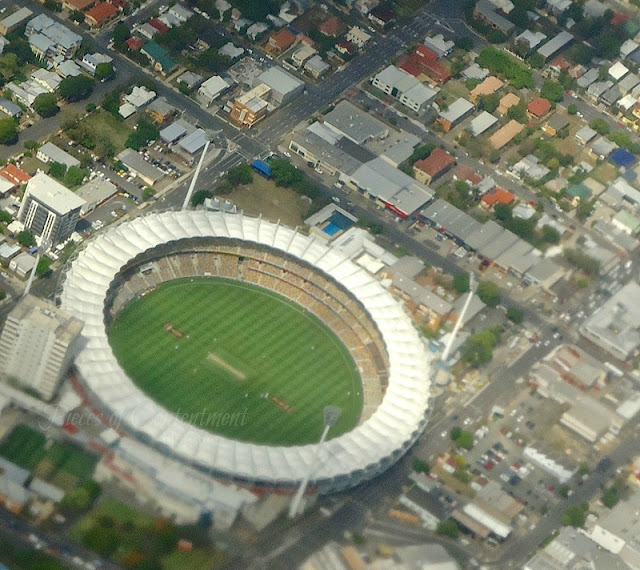 Amidst the fuel fumes you can just make out the players. There was an international test match in progress between Australia and South Africa. Miss G and Miss N - this is for you! (Miss G and Miss N are currently interstate themselves playing cricket - it will be over a week until we are all together at last as a family). 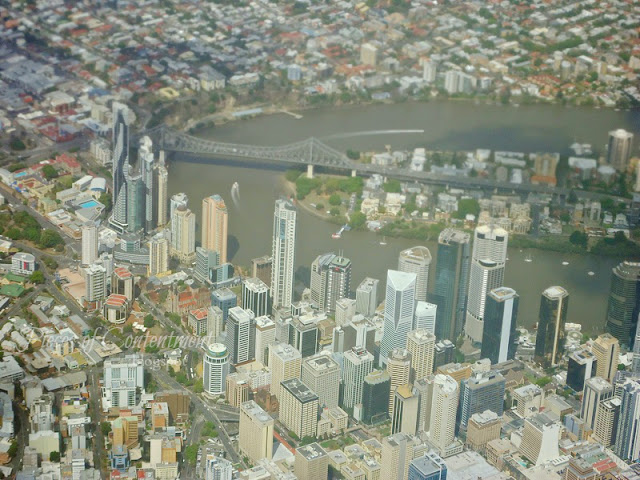 Continuing over Brisbane city and you can see the CBD and the iconic Story Bridge. 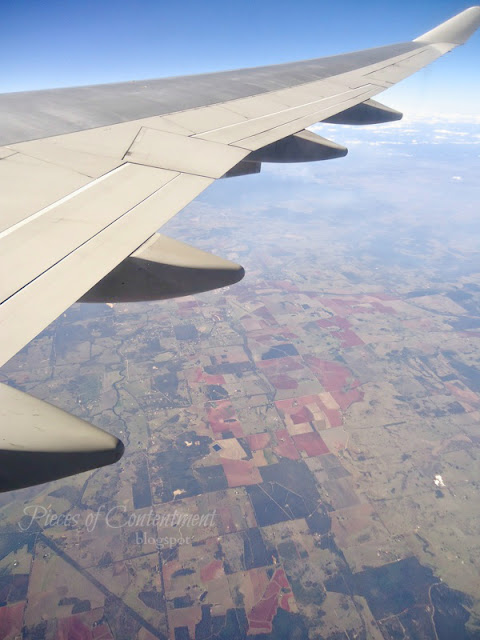 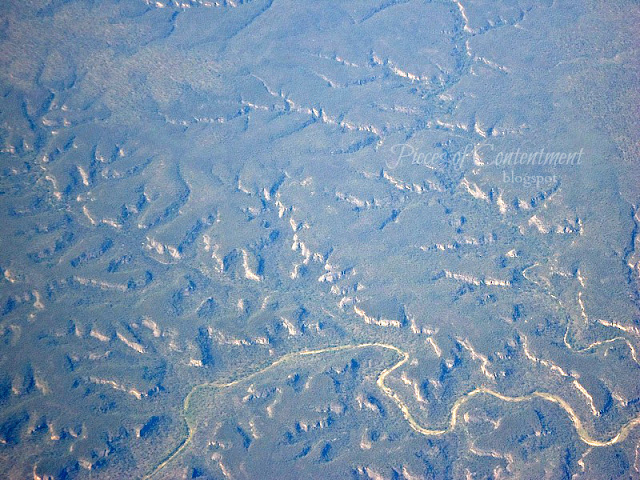 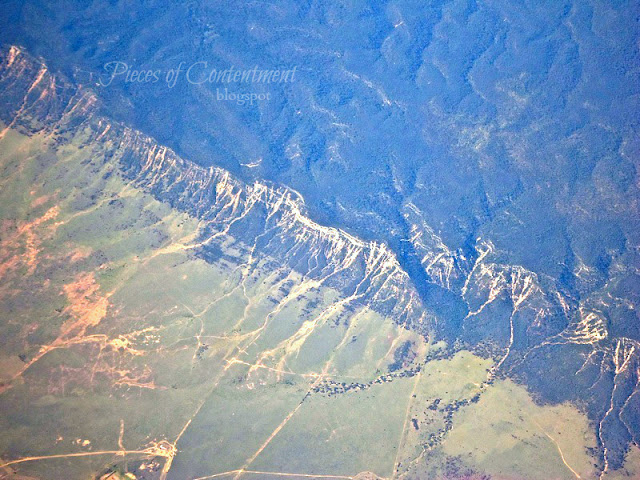 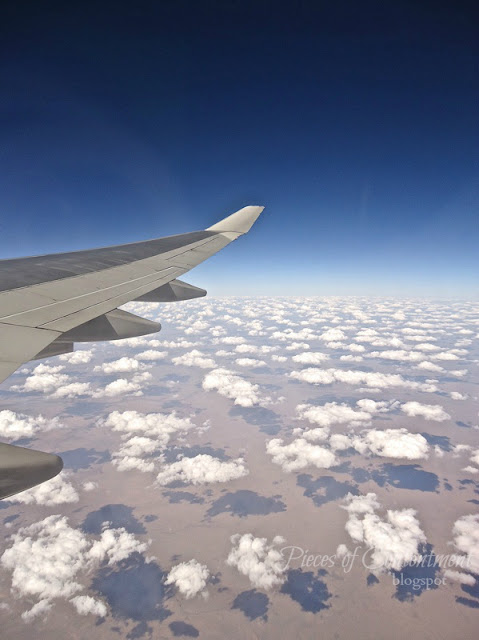 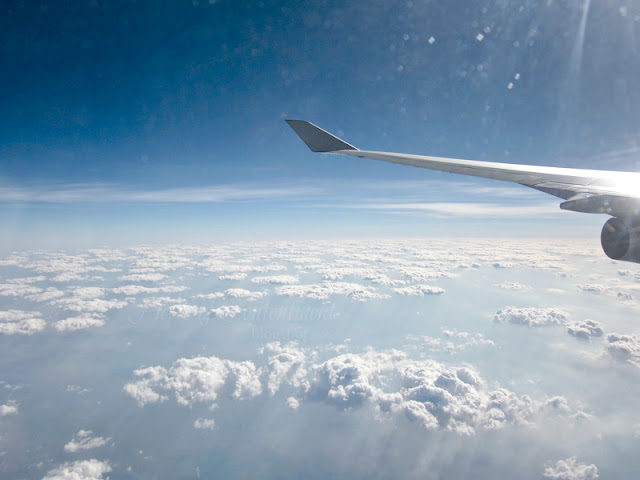 My husband was on the opposite side of the plane. 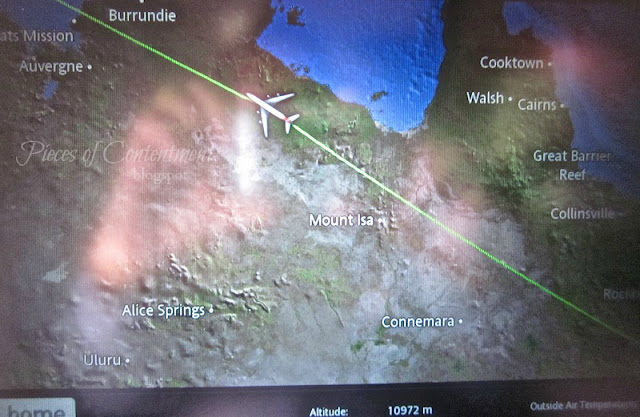 Over 2000 km (1200miles) travelled and still passing over the various landforms of our continent. 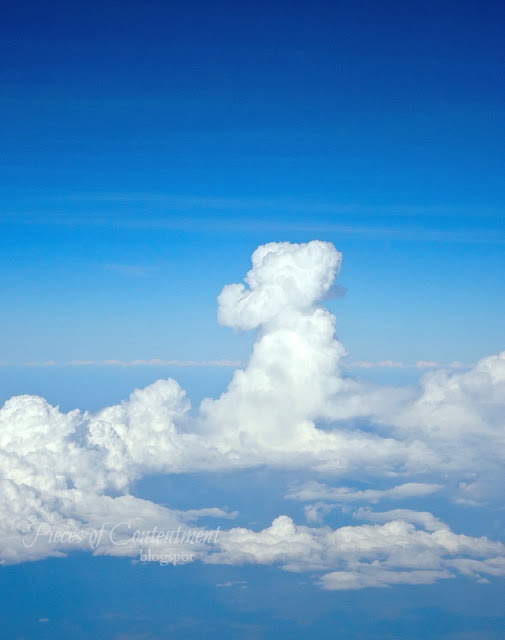 The changing cloud formations are fascinating. 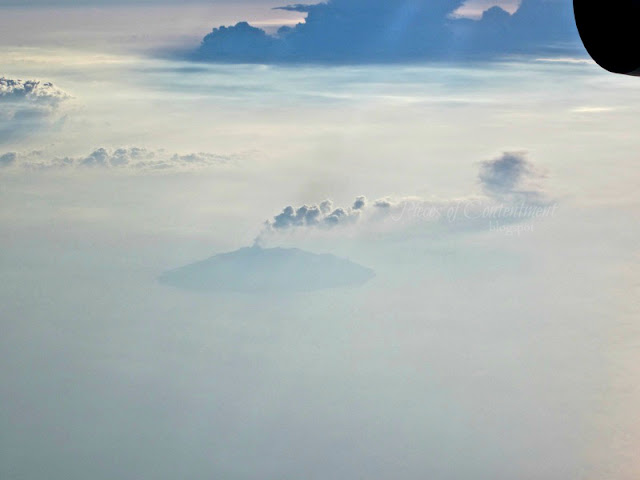 This appears to be a small active volcano island amongst Indonesia's 18,000+ islands. 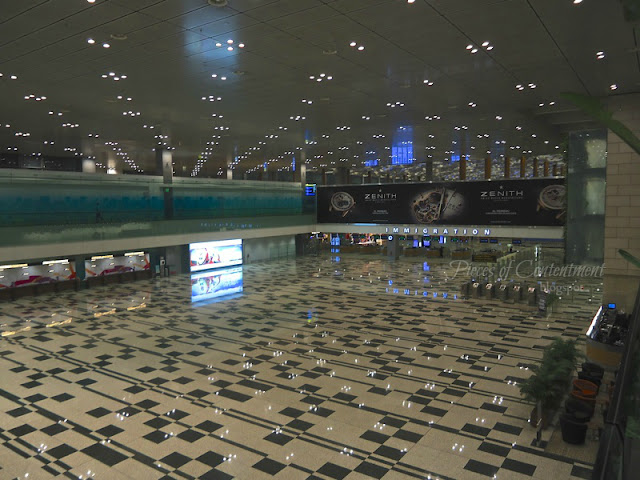 At last they arrived in Singapore Changi Airport. Being very late at night it was unusually quite. 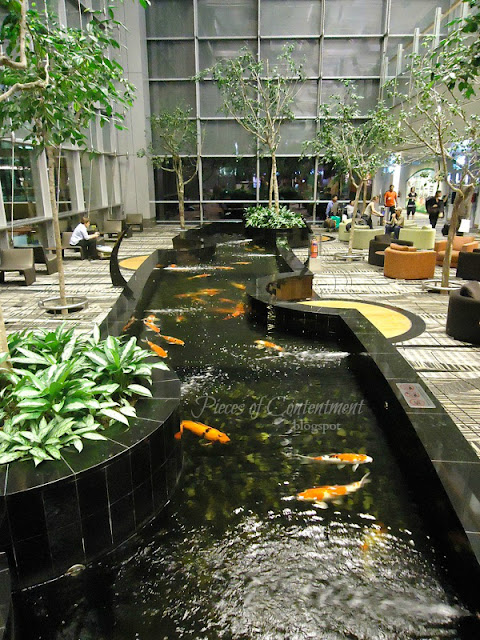 Changi Airport looks like a pleasant place to pass some time, even though it's nighttime. 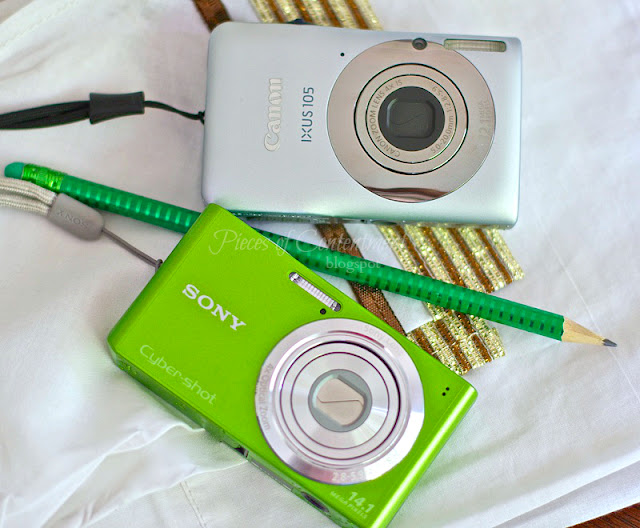 These are the cameras they took with them. Most the photos shared are taken by Miss E with Miss V's new little Sony Cybershot (which cost under $100). I'm quite impressed! 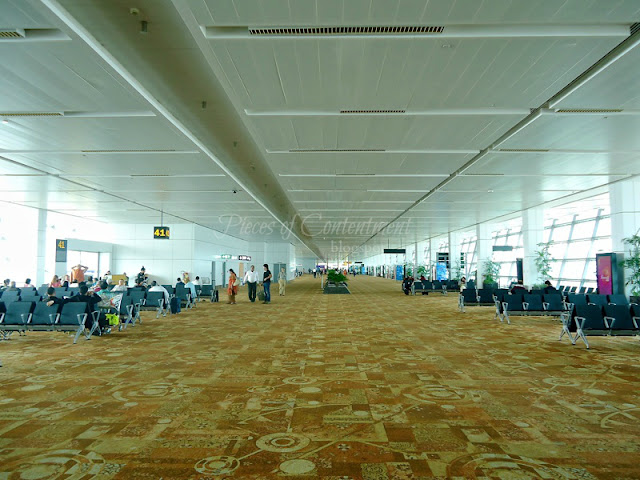 A few hours later they caught their flight to Delhi where the airport is very open and welcoming.
The real adventure soon begins......

Posted by Karen @ Pieces of Contentment at 12:58 PM

I had a Sony Cybershot for a couple of years and it did great on our trip to Italy. So glad Miss E and hubby got home safe and sound. The pics are marvelous.

So happy that Miss E and her Dad got home safely!! Wonderful captures, the next best thing to being there myself! Thanks for sharing their adventure! Look forward to hearing more! Hope all of you have a great week, Karen!!

Glad that your family is back safely, and can't wait to see all of your photos and the stories that go with them!!

We are in for a real treat, judging by this intro to the trip to India.
Glad they are back safely and there will be lots of excitement when everyone home next week.
Blessings.

Thanks for taking us for a ride:)

cool shots glad the travellers are back safe and sound!

These pics makes my stomach tingle - love to travel! :-)

Praise God that Miss E and her Dad returned home happily.
Lovely all the photos. Fantastic relationship.
I send greetings.

So glad they got home safe and sound. I enjoyed seeing the photos they took. When I see these photos I think who needs those big camera's. (I do). LOL.. Can't wait to hear about there adventure.

Great to hear they arrived home safely! I'm sure they have many great stories to tell. I bought Bec a Sony Cybershot for her 18th birthday (her first camera) and I bought a similar model for Michael for his 50th last year (I spent a little over $200 for each). Both take really great photos. Bec of course updated to her Canon 1000D early last year when she was stuck at home unable to study, while her health improved.

Those are fantastic shots from the airplane! Even a shot of a smoking volcano, wow, and the views over the city are crystal clear, I'm very impressed. What an amazing trip for your daughter to experience.

Glad to hear they got home safe and sound.
Marvelous photos!!!

Great shots from the plane.

Wow!! Great shots.
I'm dying to travel again with my DSLR. Last time we went overseas we still had the film camera and you had to be so conservative with shots because developing them cost a fortune! :)

What an amazing viewpoint! Love these photos. They are just so beautiful. A wonderful way to see the beauty of His creations! Thanks so much for sharing!!

I am very impressed. This such an exotic trip to this country bumpkin. However, I can verify that small cameras such as those pictured can take great photographs.

Excellent trip it seems, I look forward to seeing the next blog! I will go to India myself in February :-)
Best regards, Marion

Great shoots!
Look forward to next...

Lots of things to say in very little time.... So pleased that your two people are home safe, it's must be such a mixture - glad to see them home but happy that they had the opportunity. And then with your other people away - what a topsy turvy time. These photos are just wonderful, please pass on my compliments and let them know I'd like to think I'd take such great photos also from the plane except when I'm in the air my eyes are mostly closed and my hands in the form of fists ready for the imminent plane crash. Hope you're going ok emotion-intact-wise.

Those are truly extraordinary images!

I photographed with a little Sony Cybershot until 2008, really a great camera.

Heaps of great shots there.
Sydney - City and Suburbs

Awesome series of photos. Looks like a fantastic trip to India! Thanks for sharing, have a great weekend!

I love flying from one place to another...!
yeah Delhi international Airport is really good one... :)