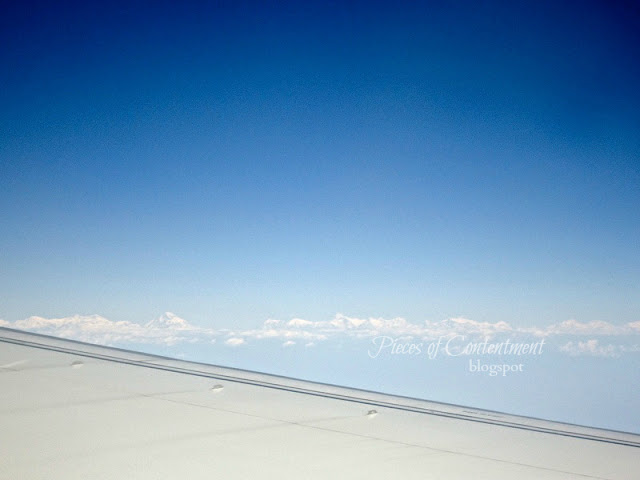 A two hour flight from New Delhi to the south east brought the the team to Bagdogra Airport at Siliguri. Miss E managed to snap this shot of the snowcapped Himalayas to their north, even briefly spotting Mt Everest.

Siliguri is still in India yet only 20km from Bangladesh and Nepal, and around 100km from both Tibet and Bhutan. Coming from Australia, being so close to four other countries is quite mind-boggling. 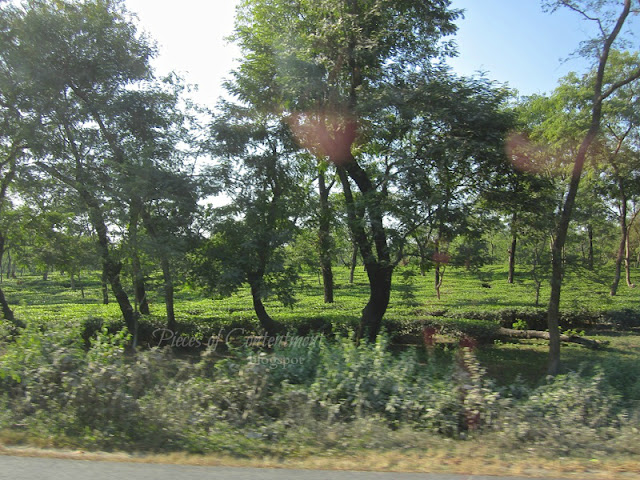 Siliguri is in the Darjeerling district of West Bengal, an area famous for its tea plantations, which are very picturesque, in beautiful shades of vibrant green. 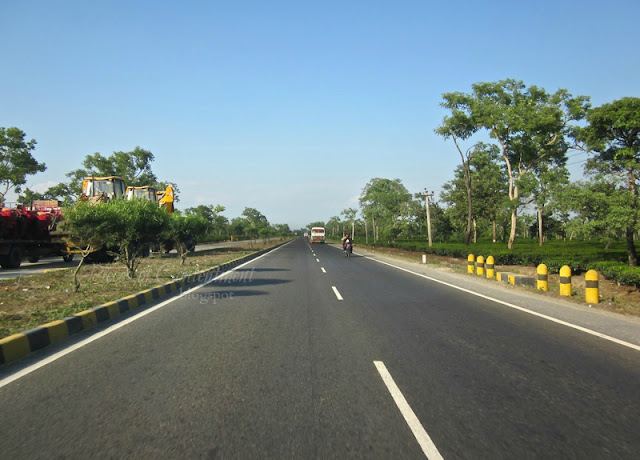 From Siliguri they were driven to Purnia, the home city of our friends. Much of the way was four lane highway which is mostly quite busy with traffic of all sorts. 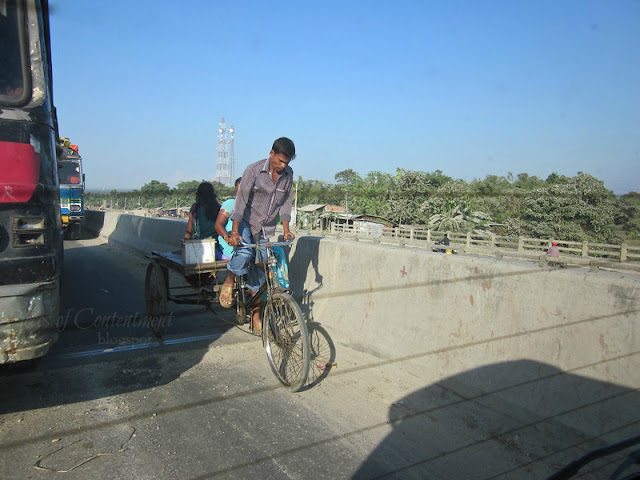 Note the mobile phone towers in the background. 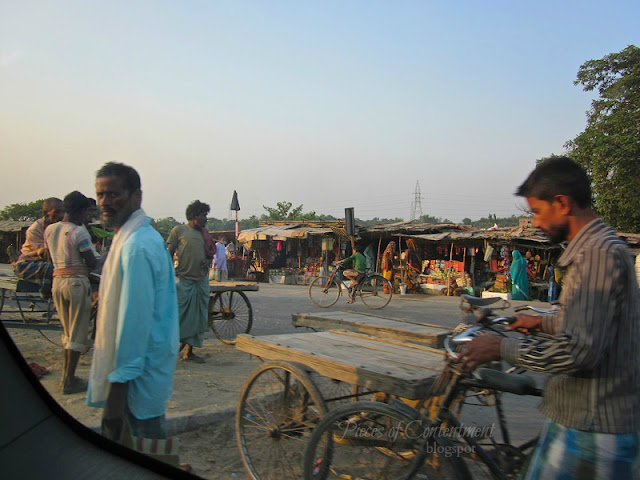 A town along the way where the highway no longer exists. 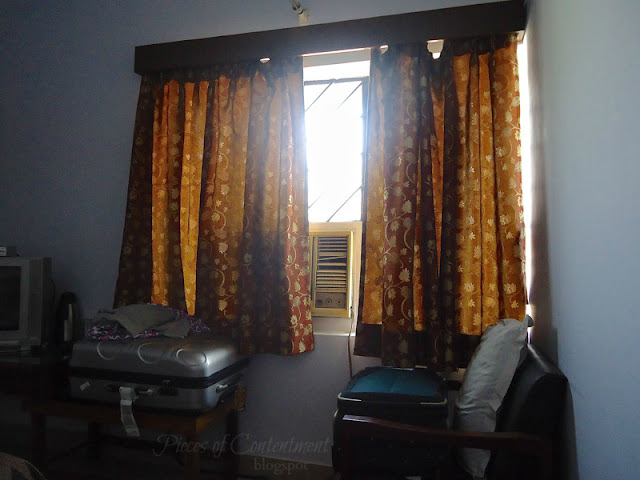 At last to their hotel in Purnia which was clean (although no hot water) and served good food. Purnia is a city of around 300,000 people in the northern Indian state of Bihar. Although coming into their winter, the daytime temperatures were around 27C/80F. Like much of India, their summers are very hot. 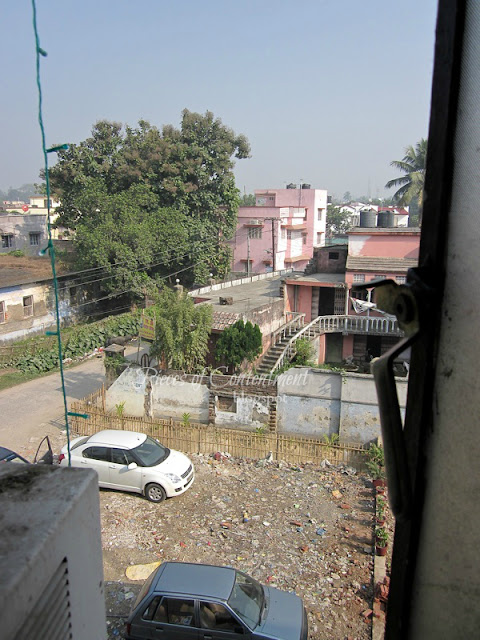 This is the view from Miss E's hotel window. Can you see the wild pig? 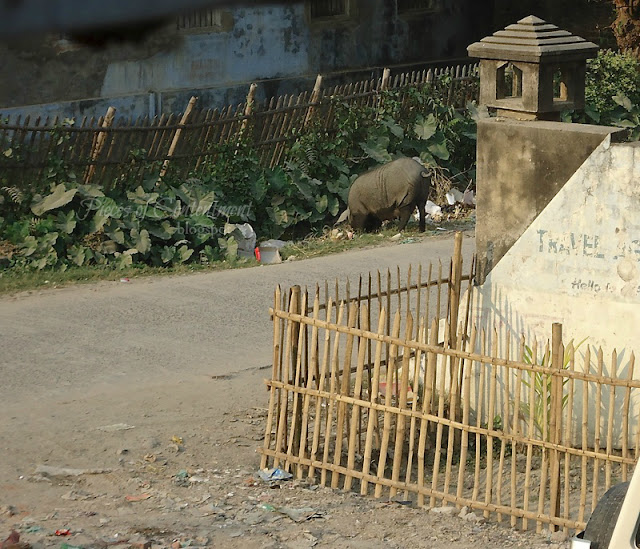 Zoomed in on a pig at the same spot another day. "Were there many pigs?" I asked.
"Yes, quite a few, but there weren't as many pigs as street dogs and cows," she replied. 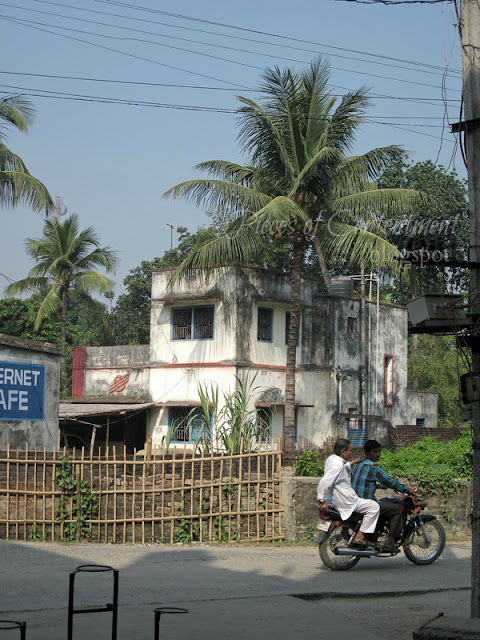 This is the view from the front of the hotel - note the internet cafe on the far left - which happened to be closed several days in a row due to a Hindu festival, then a Muslim festival. When open, the connection was unreliable and very slow. This helps explain the great lack of communication with home. One team member had a computer literally blow up in front of her. 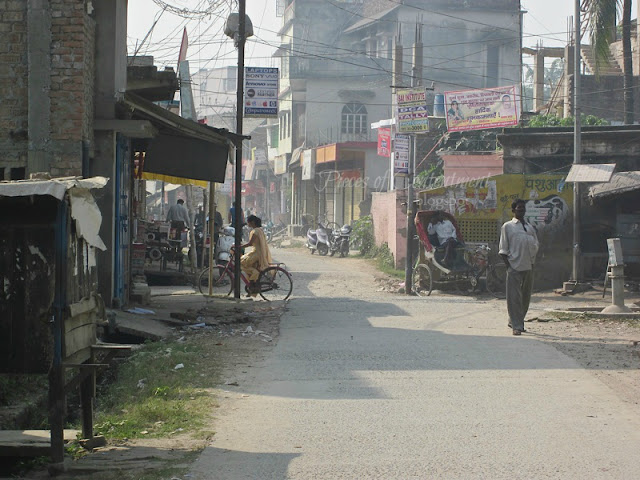 On the first morning my husband decided to take a walk around the area. It was all so quiet due to the public holiday. Mostly this "street" was very busy and noisy with cars, bikes, pedal rickshaws and people continually passing through in both directions. 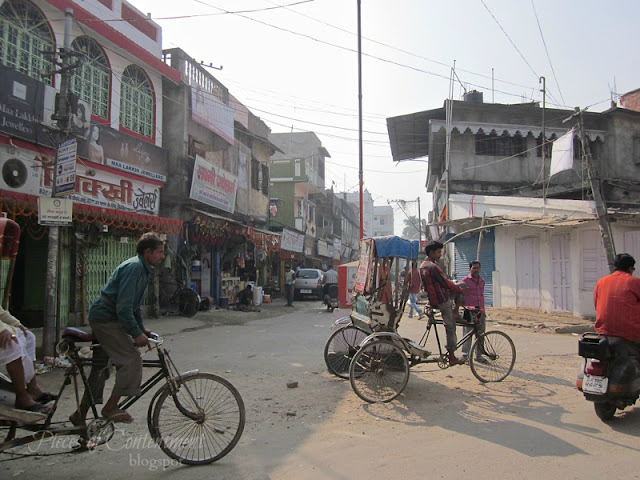 A nearby intersection, again everything is closed due to the holiday. My husband said he had a brief look in the jewellery shop on the left one day (green grills) and they had quality items for sale, including a pair of earrings for $1000 - no he didn't do any shopping there!

A land of surprises and great contrasts. To be continued.....


Sharing at Weekly Top Shot (although taken by my family, not me).

Posted by Karen @ Pieces of Contentment at 9:33 PM

Very interesting photos, I am enjoying the journey. Thank you.
Blessings

Thrilling to be back in India! I have been in the south twice, Tamil Nadu and loved it :-)
Great pictures and love to see more ;)
Happy journey!

Your husband and Miss E spent quite some time on planes and airports before finally arriving at their destination. They made memorable pictures though and saw beautiful and surprising parts of the world. With France on our backdoor it is strange to read that it's so special for Australians to be surrounded by four different countries. It is so normal to us. We drive a quarter of an hour and have to start speak another language if we want anyone to understand us. It is so good of you to point us to these little differences we would never ever think of. The differences with India are huge though. It must be such a very special country. The cows in the street, we all know about that but it remains unimagineable almost, and there are wild pigs as well? That I didn't know.
Bye,
Marian

Really a nice picture of how people live in india and then I guess they are good off. Love the last two street shots with the dusty atmosphere.

A journey which I am enjoying following through Miss E's photos.
I have always had a desire to visit India, may be I will one day. However, these days, I am not keen on long flights.

What an interesting trip! what made you think to go to Purnia?

Wow, it is definitely a land of big contrast! First time here, love your blog! :)

Wonderful captures, especially the last two. Really gives you an idea of what life it like there. Enjoying this series so much!

Hello!
I am charmed by your posts. It is very intersujący.
A photo? they are fantastic!
Yours.

To jednak kraj wielkich kontrastów. Widok uliczek wcale nie zachęca do spaceru. Wydaje mi się, że ludzie tam żyją w ubóstwie. Dziękuję za pokazanie malutkiego kawałka tego kraju. Pozdrawiam.
But this is a country of great contrasts. View streets do not encourage walking. It seems to me that the people there live in poverty. Thank you for showing a tiny bit of the country. Yours.

I follow this with great interest, what a difference to what we are used to!
Marion

A glimpse into a whole different culture and environment - very interesting shots. Thanks for sharing.

Great shots of a whole new kind of reality!

Loved seeing into the life of this Indian village...thanks for taking us there! Blessings, Nancy

What a great series of images... love the wild pig rummaging around the side of the road... Thank you for sharing on Weekly Top Shot #59!