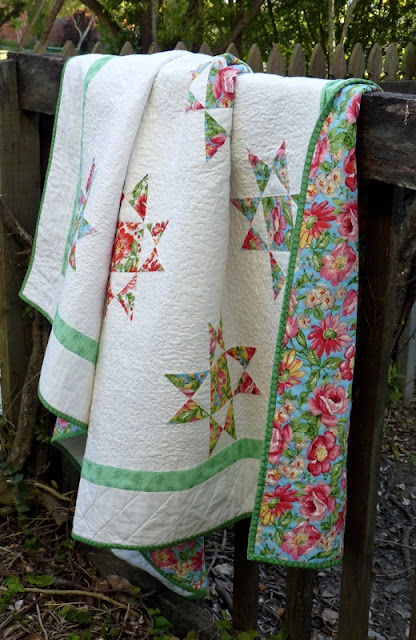 About 12 months ago I received my first order of fabric from the US. As soon as I saw the American Retro blue floral I thought of my Mother-in-love. For weeks I considered how to make the most of the beautiful floral which I then ordered in the other two colour-ways as well. I eventually decided on an Ohio Star design with fussy cutting the centre squares to make the most of the print.

Work on the blocks became easier once I knew exactly what I was doing. I had planned on completing the quilt in time for Mother's Day and her birthday (also May) this year, giving me plenty of time to work on the details. However I completed my blocks by early July and thought I would keep working on bringing it together (using my faithful 26 year old Janome on the dining table as usual). 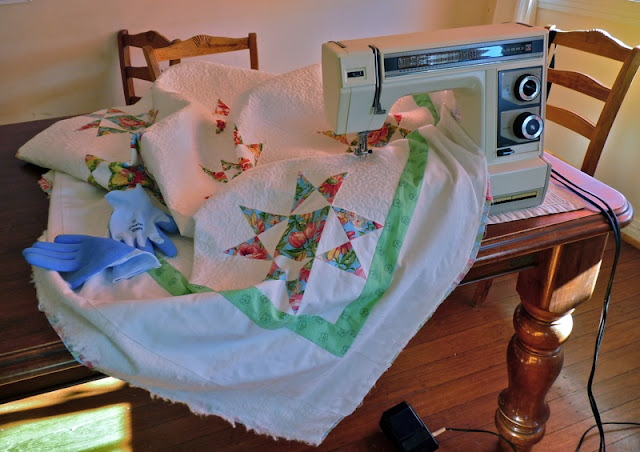 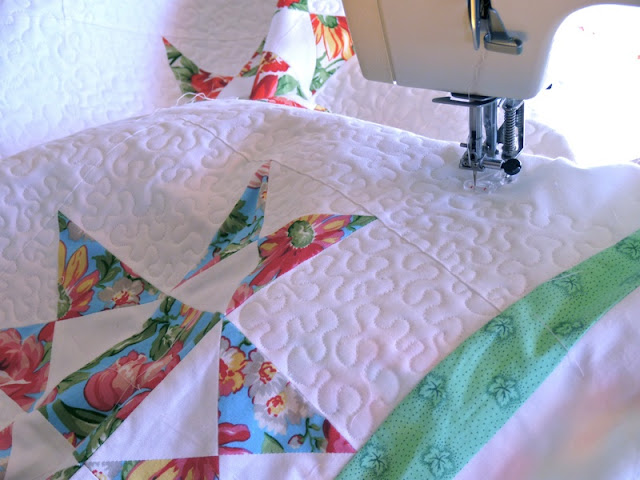 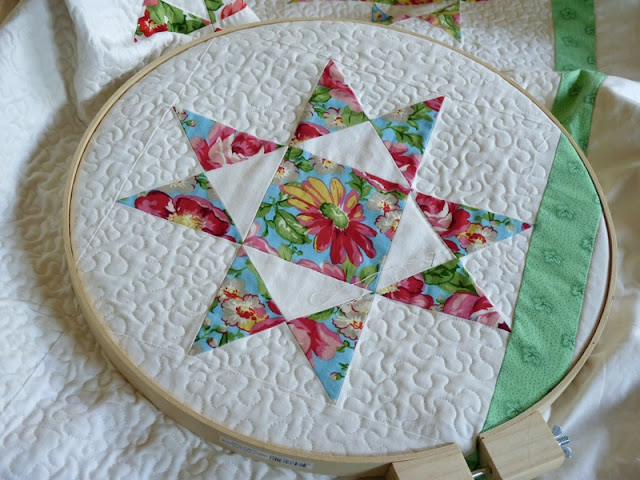 Then hand quilted around the interior of the blocks. 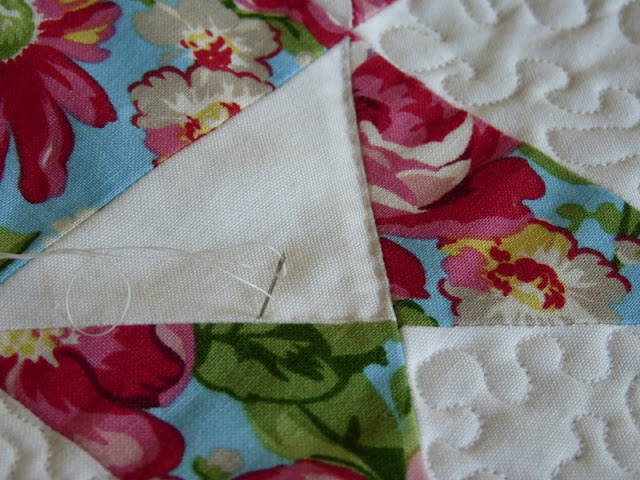 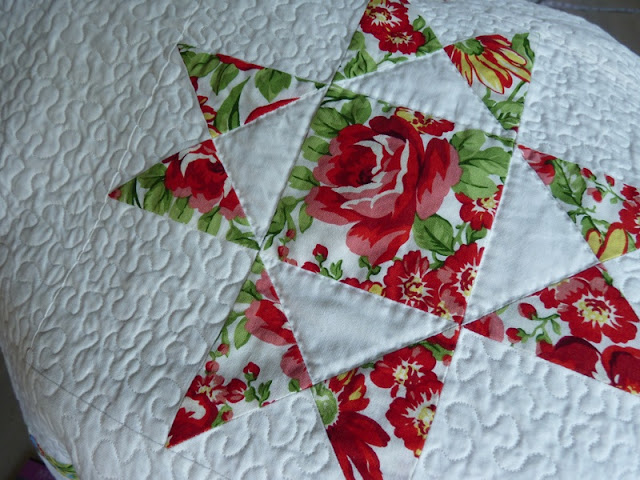 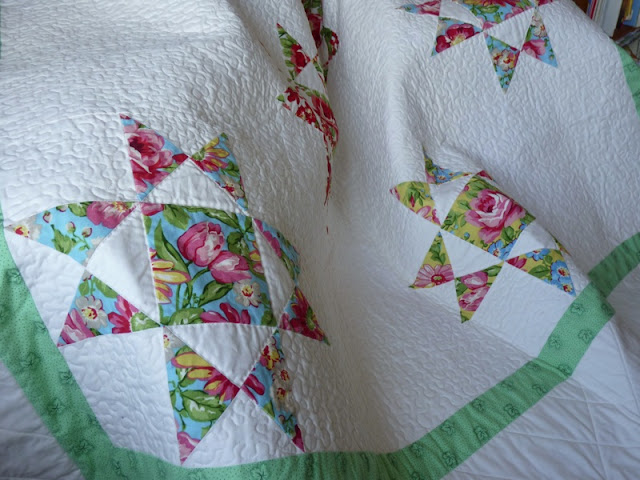 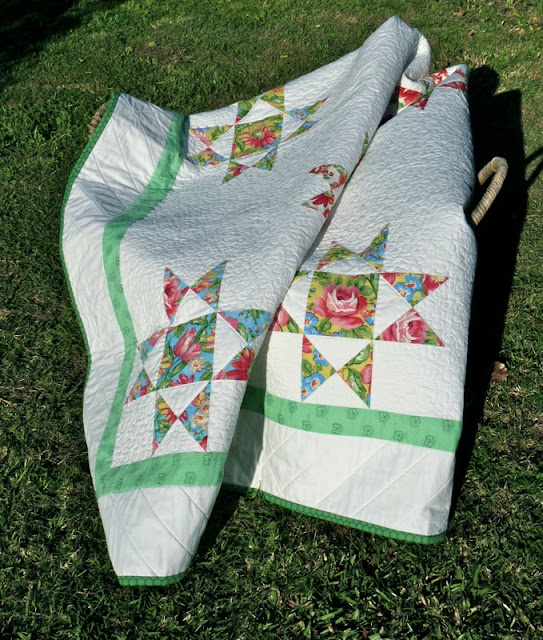 I had intended to add various details of applique and stitching to the large ares of snow between the blocks but decided "less is more" and left it as is.

By early August I had completed the quilt and I didn't want it to sit in my cupboard when I knew it could be in use. In Australia we celebrate Father's Day on the first Sunday of September. After all the fanfare of Father's Day at home, we headed off to my parents-in-love, as we usually do. Gifts, as expected, were given to my Father-in-love, then the unexpected happened......I presented a parcel to my Mother-in-love. She was surprised and a little overwhelmed and thoroughly delighted! I made a matching card with one of the imperfect trial pieces. She loves using her quilt and I am so glad I gave it to her early. 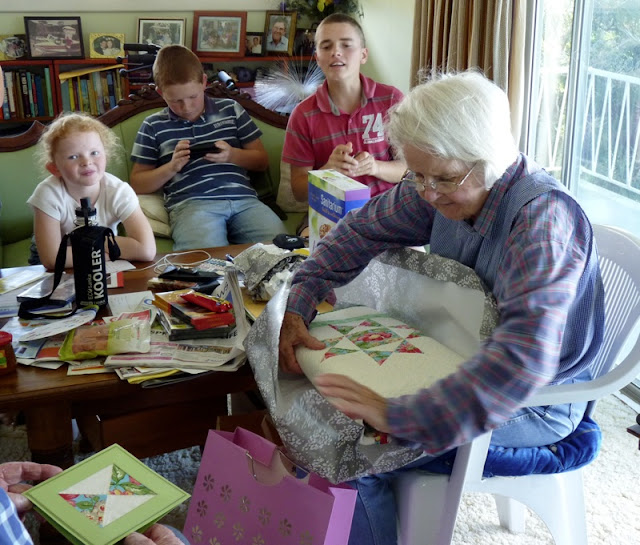 Sharing at PicStory: Self Made (and voted equal second place).
Posted by Karen @ Pieces of Contentment at 3:34 PM

what a beautiful gift!

Oh my! What a beautiful quilt! And it is the block named after my home state! You did a fantastic job on the quilting....just perfect. I love the expression on your boys face as he watches grammy open the gift....so sweet :) What a lovely gift to give!

Sweet! And a matching card?! Love that!
Monika

Thank you everyone. I love being able to share projects and ideas. I'm thankful I took photos of this quilt in progress, at that time I had no intentions of starting a blog.

Very pretty! I love the various types of quilting you did.

I had been visited your blog for some time and I have interested to get in touch with you but my English proficiency is not good so now I'm writing in Spanish, google is translating my words, and my husband is trying to be improve google´translation. It will be excellente if you can understand Spanish?.
beautiful quilt!!!!

Thank you for stopping by to say "hello" Andrea, I am very pleased to have you comment. Your husband's English is excellent! Unfortunately I only know a few words of Spanish and have to translate you blog to English to read it. I enjoy your blog and your lovely photos of Argentina also.

Your quilt colors and pattern design is absolutely gorgeous! How often do you get your fabric from the states?

I must say something here. Your sweet daughter Elise was one of the first commenters to my blog, and those "first ones" hold a special place. She is precious. (I know you already know that.) I found you from her blog, so glad I did.

Thank you Cathy for your lovely comment. I buy nearly all my fabric from the states. We have only a limited range available in our town and most quilting fabric in Australia is around $24 a metre. How often I order depends on what fabric and sales I find and also how much sewing I am managing. I usually buy 7-9 yards at a time, whatever that site will fit into an international envelope. I ordered some fabric this week, the first for a couple of months.

Indeed Elise is precious! I'm thankful to have connected with you.

on that machine quilting! I do not get in my janome .. my quilt is very large

Wonderful quilt. It´s so much work and nice how you shows us with pictures, a real *PicStory*. Thanks for linking in! :) LG Tina

Very pretty quilt! and the joy it brought her - you can see it in her eyes. :)

Fabulous quilt. I am sure your mother-in-love appreciates not only its beauty but also the TLC and time you put into making it.

[Thanks for your comment about blog design. I have tried to change the template design, but it has the unfortunate effect of changing all my earlier posts, which then just don't look right.]

Another masterpiece, your MIL has a treasure that can stand the test of time. YOUR stippling is perfection. All curves of the spippling are perfect, no flat lines, all curves. That is talent. AND YES! those Janome are work horses.