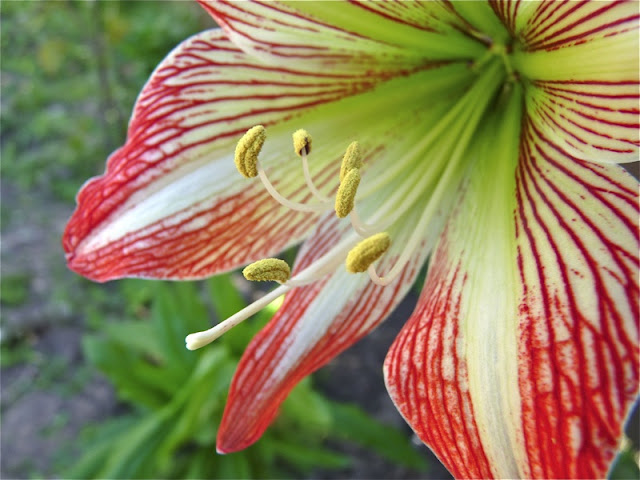 A few weeks ago I noticed some plants struggling for light under our ever-growing plumbago bush. On closer inspection I recognised them and hippeastrums, then I remembered my parents had brought some with them to plant in our garden about 10 years ago.

My mother, a keen gardener, had collected the bulbs from the family farm where both my father and I grew up. She took them to their new home in town when Mum and Dad retired early (due to my father's  Parkinson's disease and dementia).

Several months passed and we bought our first home. There was some garden work to be done when one of our fences was replaced. Mum and Dad brought a few plants with them, including some hippeastrums, which Dad dug holes for and helped plant in a bare space.

When I rediscovered these plants recently I dug up all three bulbs and relocated them to a better spot, far from the huge plumbago. I wasn't sure if they would survive, the bulbs were slightly damaged - it's hard to dig under a plumbago bush.

To my delight they have begun to thrive and even flower in their new spot. As I look at them flowering they hold extra significance for me now. My father passed away last year, a shadow of his former self. Mum visited one day last week (her town is about 2 hours drive from us) and was quite pleased to see the hippeastrums again.

See how quickly the flowers open up when the time is right! Here is the first flower.

This is the second flower on the flower spike, fit to spring open.

Just 45 minutes later and they are both fully open.

One little stamen about to split at the top.

We had a shower of rain during the afternoon. The first stamen is half open now.

In the space of two hours the stamens have all fully opened.

Today is the 15th and they still look like this. More buds are filling out ready to repeat the miracle again and again. Joy, wonder, satisfaction and memories are mine as I keep watch.


Sharing at And Then She Snapped, Sneak Peak, Today's Flowers.

Posted by Karen @ Pieces of Contentment at 1:29 PM

She is just beautiful.
I love the song you have one too. :)

I'm happy to see this story in pictures!

so amazing - I love those flowers!

Love how you do these series. This one is so beautifully done. A treat for the eyes!

Your life seems so full of beauty. I'm sure these will be an in spiration for your needlework as well.
You make me wonder if I could plant mine outdoors. How cold are your winters?

Hi Hannah, we have a few mildish frosts in winter but no frost in the areas of the yard where these are planted. We never have snow. It's not recommended to grow them where they would receive any frost.

I absolutely love how you capture the opening of flowers like this. I gives me great joy to read your posts!
Thank you for putting a smile on my face tonight after a rather difficult day! xo

These photos are STUNNING!

Are these relatives to the amaryllis? These are beautiful.

My father passed in 2007 from Alzheimers. He, too, was a former shadow of what he once was.

Big hugs from Nebraska -- nice that these flowers hold some happier memories for you.

Very beautiful! Glad they were able to survive and thrive after being transplanted!

Love the story and how this flower holds family memories close. Beautiful shots, I especially love the dark edged one in front of the fence, your macro shots just burst with life.

So beautiful! The close-ups looking straight inside the flower with the stripes are incredible.

Beautiful series of pics.quite amazing....I see how it is sentimental for you and I am glad it liked your new spot and blooming....

I really enjoyed reading as well as viewing your wonderful photographs. Amazing to see how quickly these Hippeastrums open! Thank you for sharing your beautiful photographs.

Wow!! These are just great!!

I love the track the growth of flowers

Thank you so much for visiting my blog and for taking the time to share such kind words!! I greatly appreciate it. I knew I had to follow your blog when I came across it for obvious reasons.....it is out of this world AWESOME!!! What an amazing blessing to peruse through your posts and pictures. Thank you for using your gift with the camera to bring glory to God's beautiful creation!! Many blessings ~ alice

This is a wonderful series of images and great narrative to accompany it.

avid american gardner here... and I just love looking at your photos.
I just enjoyed this tremendously.
T

avid american gardner here... and I just love looking at your photos.
I just enjoyed this tremendously.
T

Very special with the light behind the flowers.
Marion

magda and crew in australia said...

The photos are exquisite to experience thank you so much for sharing both Stories.

And continued safe travelling for your Dad... loss, even when one knows the time is right, leaves an ache and an emptiness. Time eases the feeling of loss, but not the memories... and that is good.

Your Hippeastrum is just that extra bit special... so pleased for you (and your Mum) it is rejoicing and showing you just how pleased it is to be in its new location.

Good wishes from Magda in Australia

Such a miracle of beauty!

You have described the journey of this flower in the most fascinating way! The flower looks as if it is related to the dramatic markings of an orchid! A stunning post!

What a beautiful flower.

gorgeous macro shots! my mom has this flower, we call it Lirio.

Looks like onde I had before that my grandfather had grown from seed. Unfortunately I don't have that around anymore. We have them in pots and they usually bloom at christmastime. A joy in winter for us. Then they have to be put at rest and that's when I fail. And, ofcorse, they would never survive outside....
Looking at all great flowers you grow outside mnakes me wonder if I live in the wrong place ;-)

Amazing flowers. Great you rediscovered them and had them transplanted to a better spot. How lovely to have such a beautiful gift from your parents :)

...what an interesting story behind these lovely pictures.