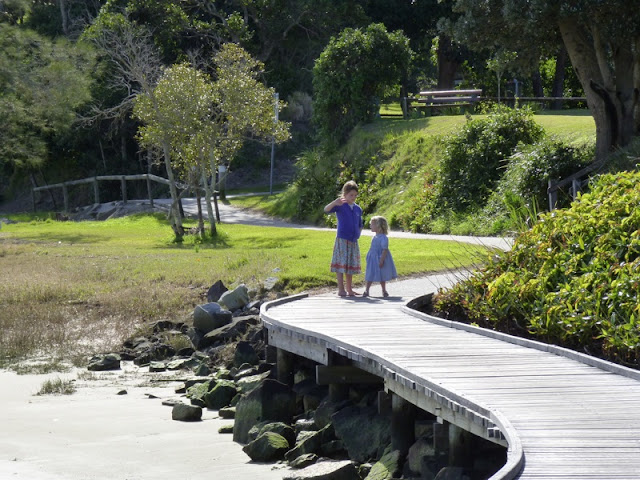 Love our winters when we have days like this! This photo is straight out of the camera (SOOC), no cropping or editing. A sunny Sunday walk, one of life's Simple Things not to be missed. Lots more lovely photos from today's walk to be shared on Wednesday.
Happy Sunday all!
Posted by Karen @ Pieces of Contentment at 8:16 PM 14 comments 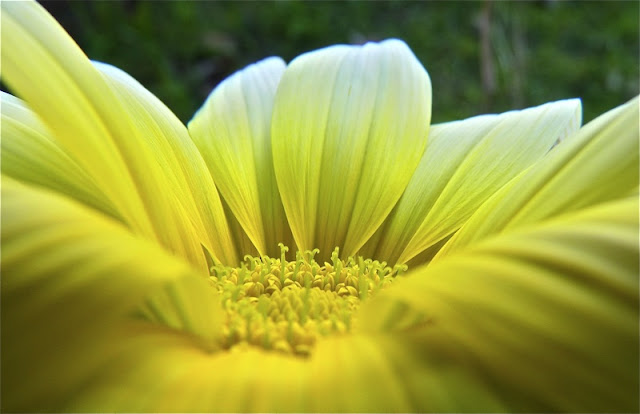 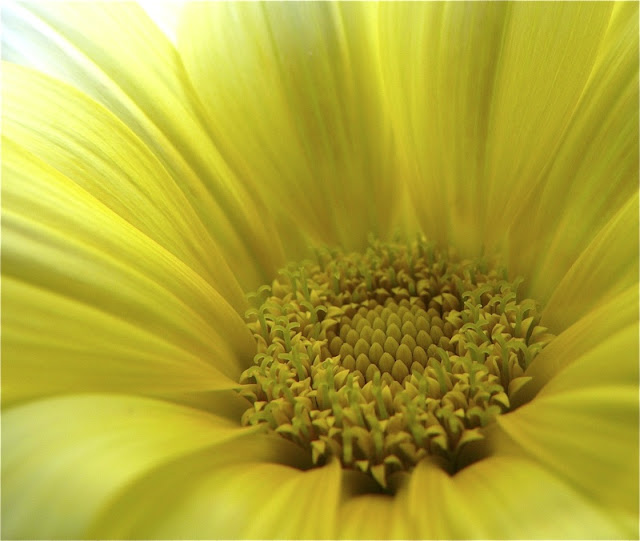 Just makes me happy to look at these!
Have a lovely weekend!

Posted by Karen @ Pieces of Contentment at 1:46 PM 27 comments 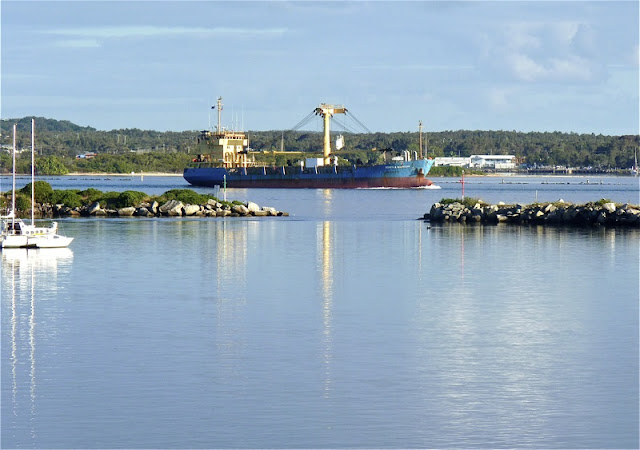 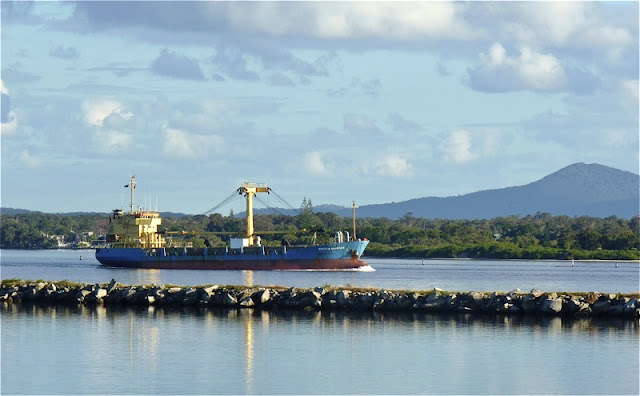 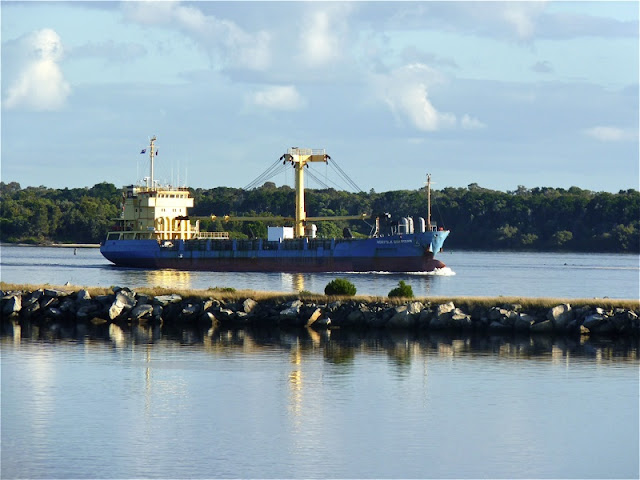 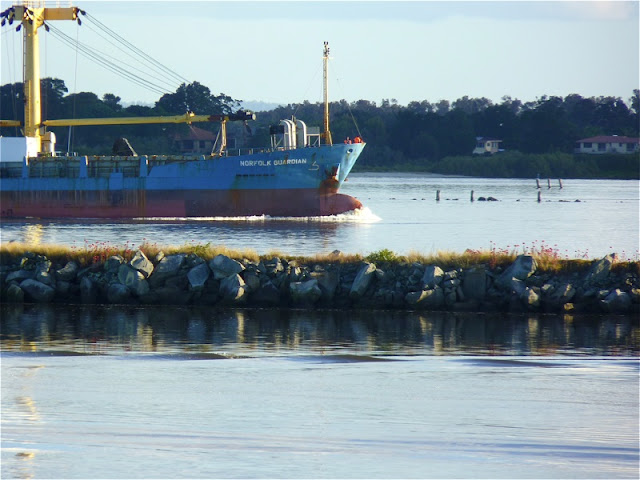 There always seems to be something of interest to see from my parents-in-love balcony. This little cargo ship, the Norfolk Guardian, had been sitting offshore for a few hours. You can see it in the second last photo here, taken a couple of hours earlier, waiting for high tide to enable it to cross the river bar and move safely up river where it will undergo any necessary maintenance, refuelling and reloading before  it's return journey to Norfolk Island.

A few minutes later I turned the camera east to capture the lovely scene below which I posted late that same day.

Posted by Karen @ Pieces of Contentment at 4:33 PM 15 comments


Yesterday I decided to take photos every hour in an attempt to really see what was happening. Remember this particular plant is growing in a shady, damp spot during our winter. Their preferred conditions are sandy soil, full sun during the warmer seasons.You can click on any of the above images for a closer look -well worth it, you will see the dew drops and finer details.

The flowers appear to respond to both humidity and light. In wet weather and on humid overcast days the flowers remain tightly closed, or at least as tightly shut as their current maturity level allows. Even the dried flowers (which can last a couple of years) tend to close a little in damp conditions, reopening when dry in bright light.

Come spring I plan to buy some more seedlings, they are a very hardy plant which is perfect for our garden!
Posted by Karen @ Pieces of Contentment at 9:20 PM 12 comments 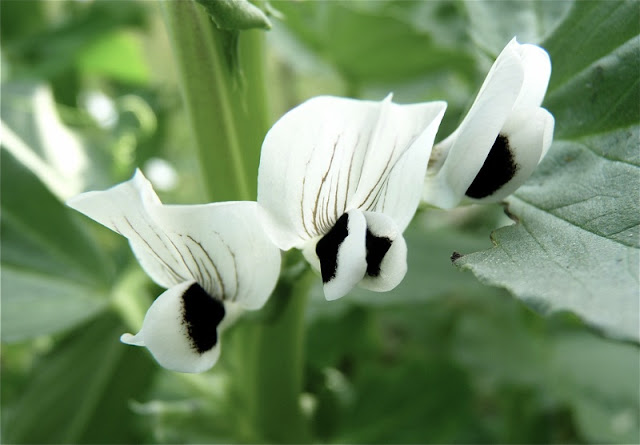 I have been watching and today I found.......some broad bean flowers! As I look closely I discover they have a beauty all of their own.

You may know these plants better as fava beans.
Posted by Karen @ Pieces of Contentment at 4:35 PM 6 comments 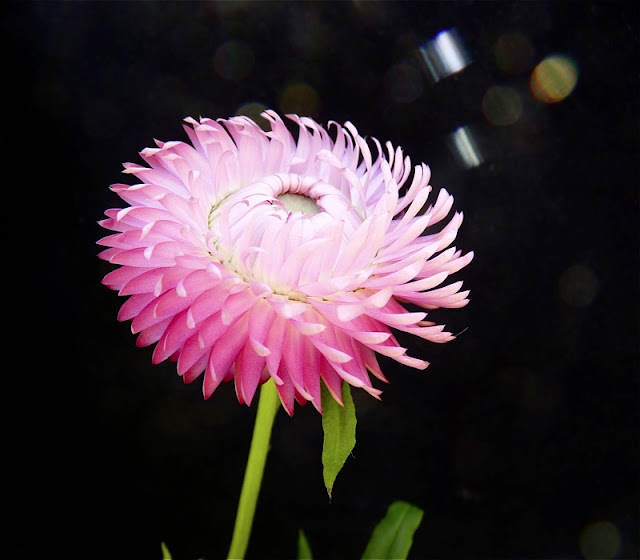 A little something from today's sunny photos. More to come soon.

I love the repeated patterns of these 'petals', giving the effect of spinning.

For a fascinating photo story tracing the development of this daisy's "big sister" check here.
You may also like to see the daily opening and closing of these everlasting daisies.

Sharing at And Then She Snapped,  Exploring with a Camera: Repeating Patterns,  Macro Friday
Flowers on Saturday and Today's Flowers.

Posted by Karen @ Pieces of Contentment at 8:42 PM 31 comments 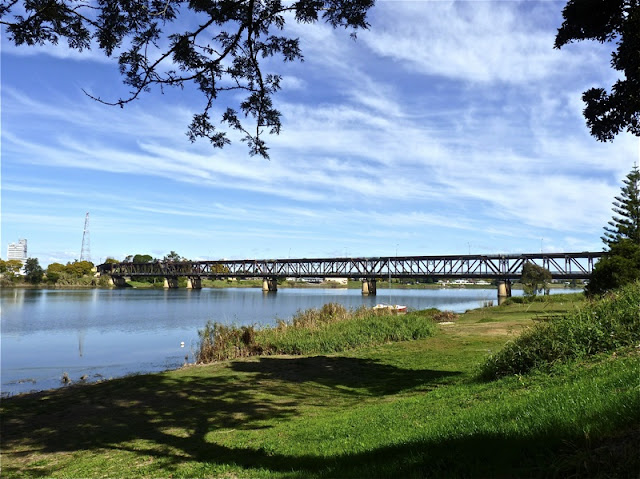 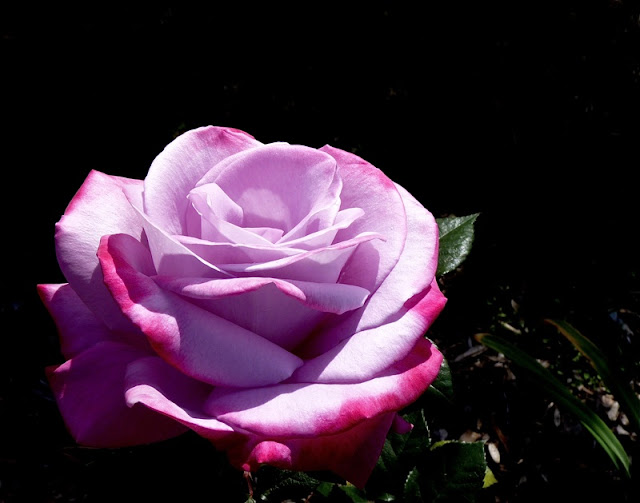 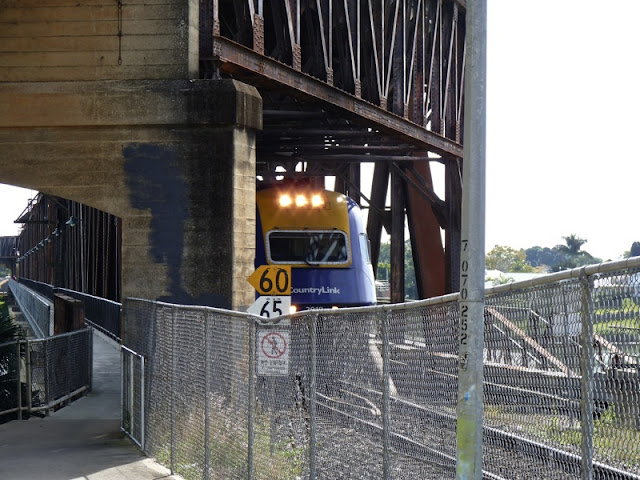 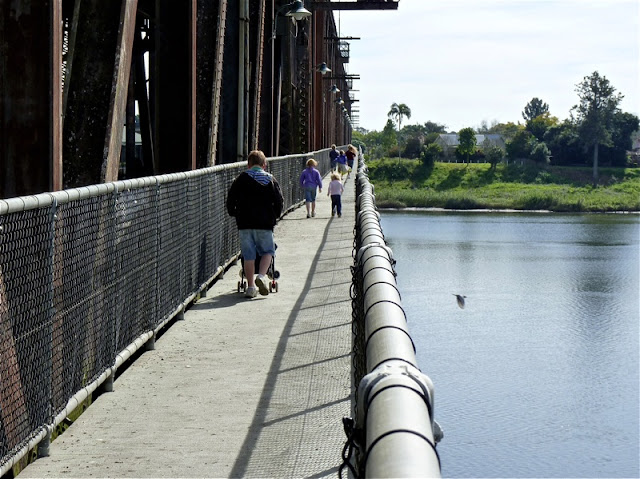 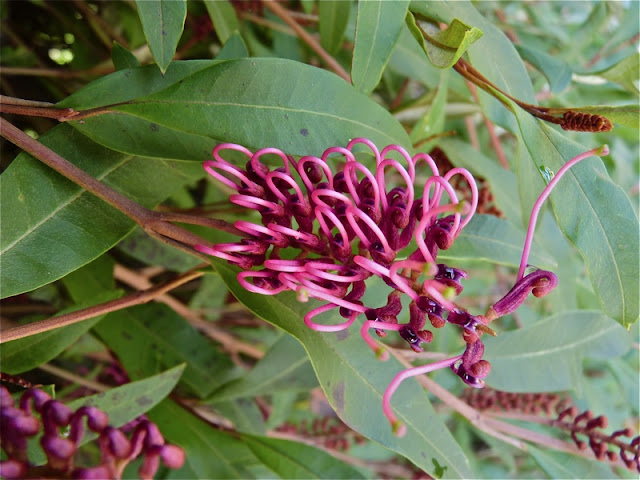 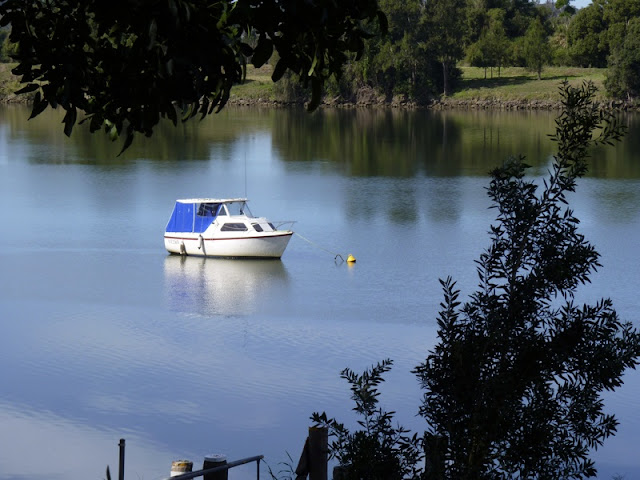 A breathe of fresh air does wonders for us all!

Posted by Karen @ Pieces of Contentment at 4:27 PM 33 comments


Join me as we trace the slow opening of another Australian native - the everlasting/paper/straw daisy. This native will likely be more well known to those outside Australia than the banksia and grevilleas I have shown to date.


These are best grown spring through autumn in a sunny spot, well drained/sandy soil. January 18th this year marked the tentative beginning of my blogging journey. That day I took these photos of everlasting daisies which were thriving in the heat of our Australian summer, close to where the daisy above is now growing. I planted the current daisy as a seedling in Autumn, in a damper spot which receives little sun during winter. Such a little battler, this plant struggled on, brightening a dull spot in our yard despite the adverse circumstances.


These photos cover a seven week time span. Each night the daisy would close tightly shut, repeating a slow opening as the sunshine gradually reached this spot in the garden for a short time in the middle of the day. Some days were cloudy and wet, some even frosty.

There is an eight day gap between the rich, luscious flower photographed above and the somewhat desiccated photo of the same flower below. I'm guessing this must have been when the weather turned noticeably colder and dry. The next three photos were taken on the same day.

Still marvellously beautiful in it's own way. This really shows the proper flowers as the pink "petals" are not true petals, but rather bracts, or leaf like structures, as is the case generally with all daisies.

I hope you have enjoyed seeing the progression of this flower. I have really enjoyed watching it's beauty  slowly changing and developing over the weeks. These plants only last a few months however the flowers can be picked and dried (upside down), then lasting for years. The original wild everlasting daisies are apparently perennials and mostly have yellow flowers.

Update: I have now completed a new photo series highlighting the daily opening of the daisies.

Posted by Karen @ Pieces of Contentment at 1:55 PM 70 comments 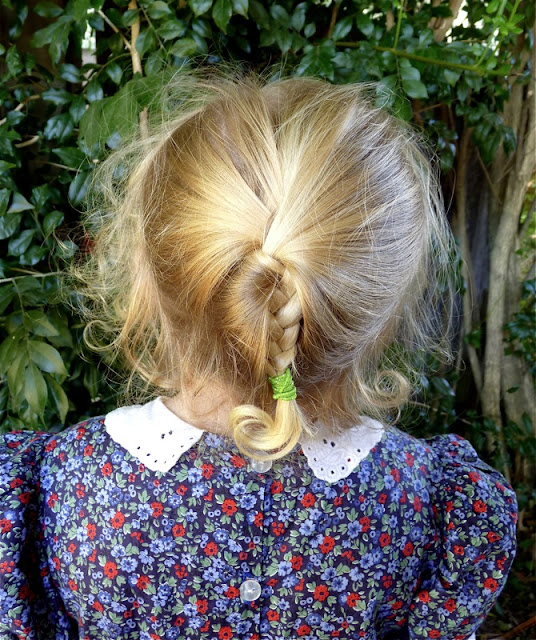 Such a simple pleasure, I love to look at little Miss E's hair. This is the second week she has asked for her hair to be plaited, just like her fiver older sisters, ready for church. Miss E is three and hasn't had her hair cut as yet. I love how it's wispy and becomes deliciously messy after a short time.

Sharing at The Simple Things.
Posted by Karen @ Pieces of Contentment at 2:34 PM 15 comments 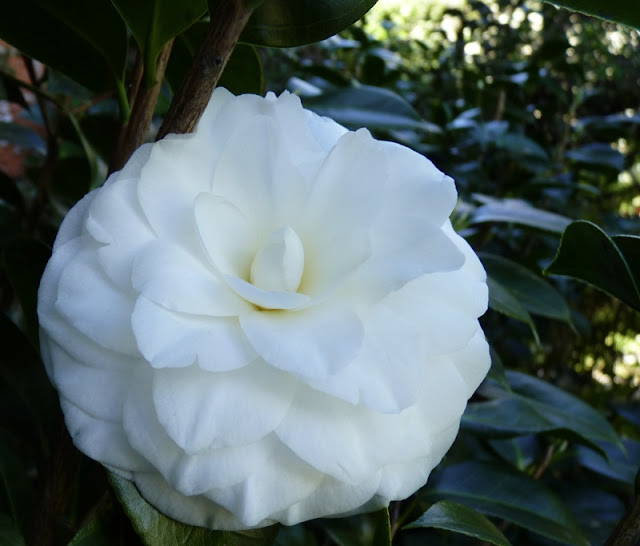 "I am leaving you with a gift - peace of mind and heart.
And the peace I give isn't like the peace the world gives.
So don't be troubled or afraid."
Spoken by Jesus, the night before he died. John 14:27
Praying for Norway.
Photo taken this afternoon, no editing. This is the flower of the bud I photographed and shared  Monday.
Sharing at SOOC Sunday, Today's Flowers and Live Every Moment: White.
Posted by Karen @ Pieces of Contentment at 1:09 PM 12 comments 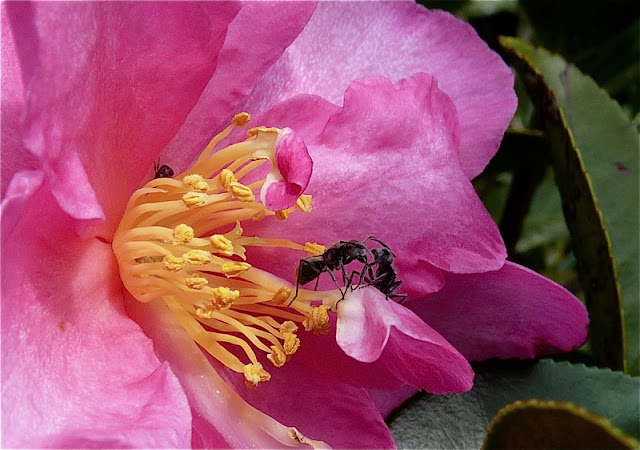 Now what may they be discussing on this little camellia on a Saturday afternoon?

Sharing at Macro Flowers Saturday and Then She Snapped WW.
Posted by Karen @ Pieces of Contentment at 2:37 PM 18 comments 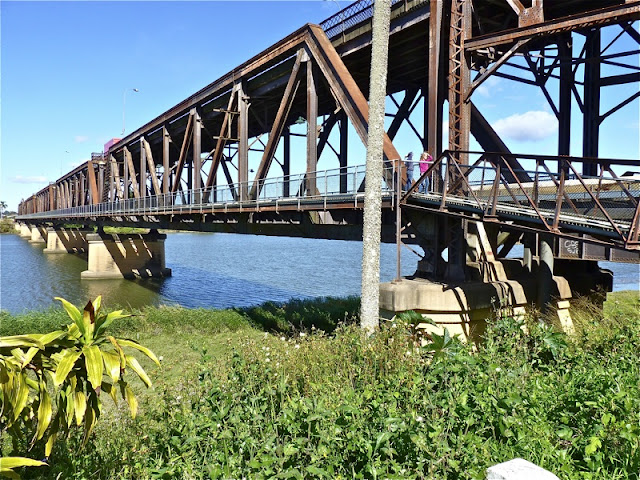 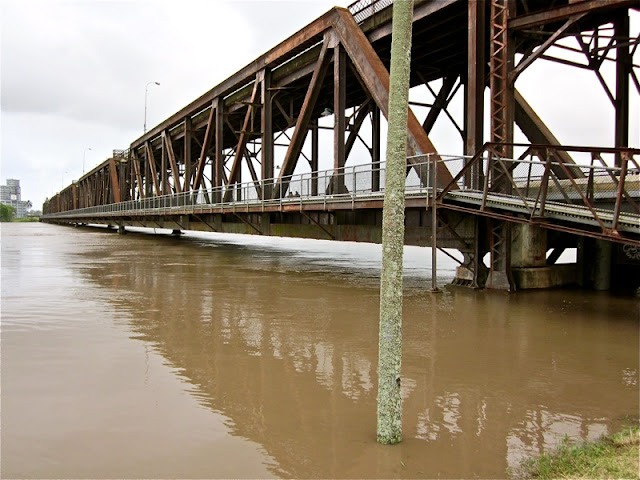 Mid January our river was at major flood levels and came within inches of over-topping the flood levy walls. Our town thankfully was spared, unlike many others which suffered major flooding during our Australian summer (some more than once). 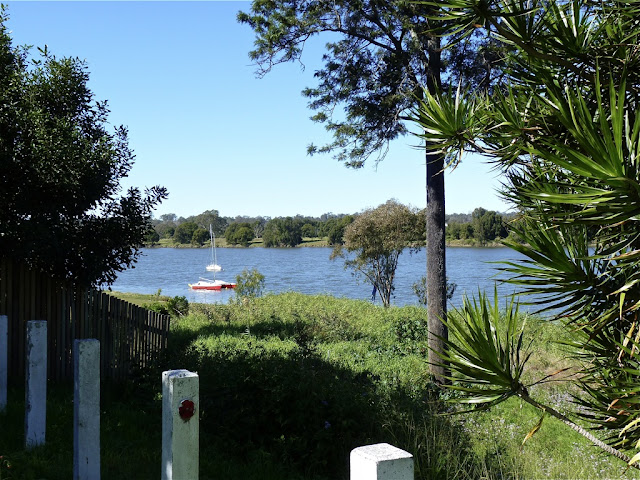 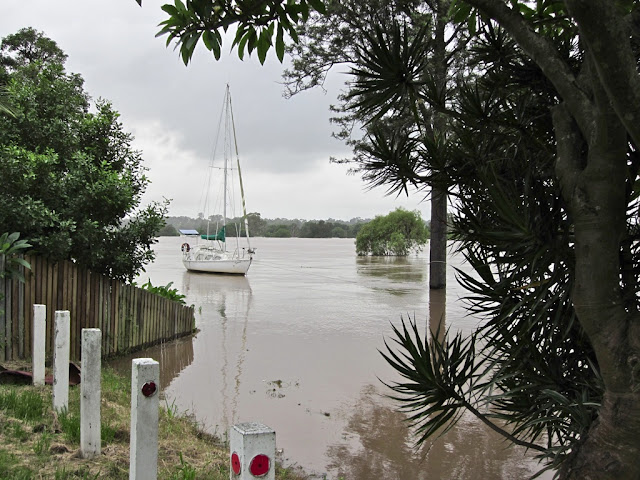 This was the third major flood scare in our town within ten years. Definitely too close for comfort. 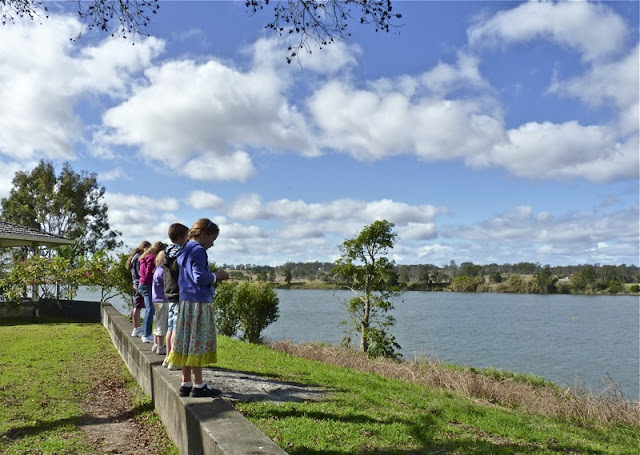 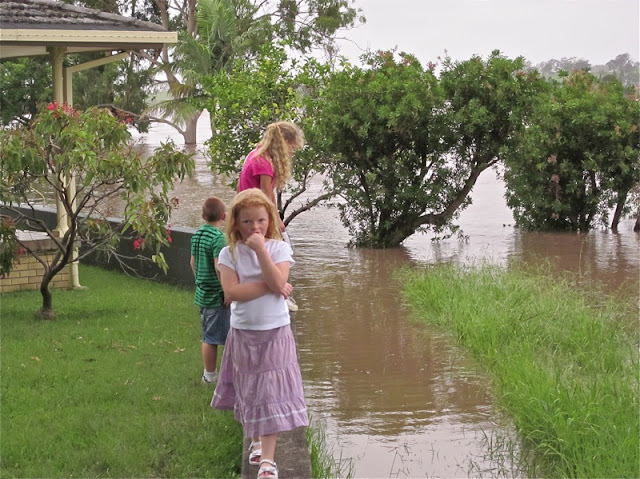 In fact, not too far from home the water was seeping through, inside the wall, being pumped out by a fire engine pump. Throughout the night we could not only hear the roar of the river but also trucks working, dumping multiple loads of dirt into a large hole which had mysteriously opened up, swelling with water near our street, inside the wall. Six months of continuous work later and our local council/government has only just this week finished replacing a lengthy section of older storm water drain which was failing. 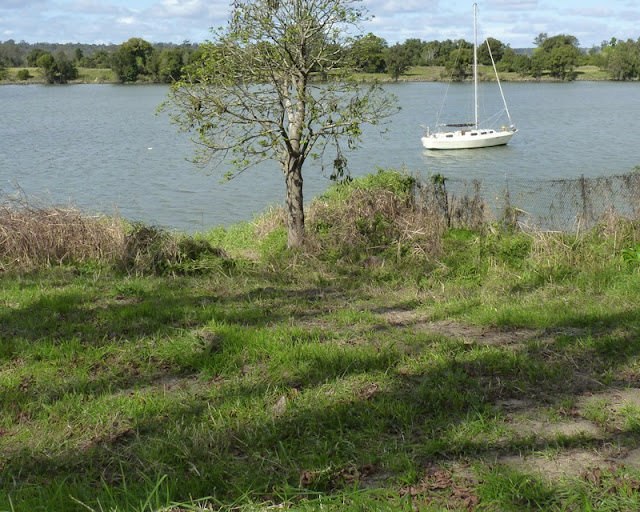 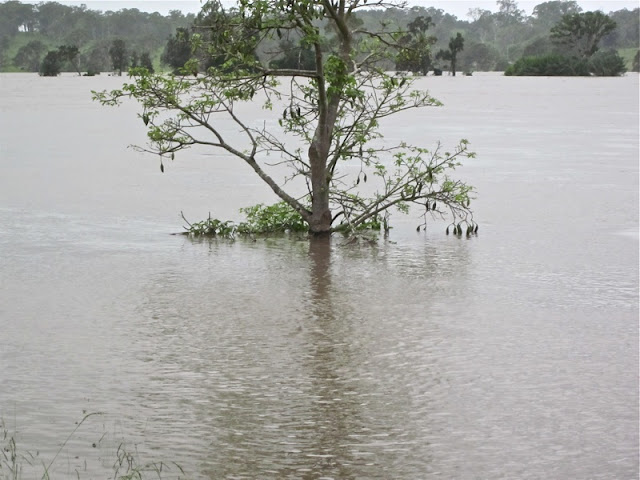 We have decluttered more, changed insurance companies to one which includes flood cover, and become even more aware of God's grace in our lives. Our happiness, or indeed contentment, does not depend on having more, or fewer possessions but on knowing His peace and grace in our lives. I choose to be constantly grateful for all that is truly good and beautiful in each day, and of these things there is no end.

Posted by Karen @ Pieces of Contentment at 4:06 PM 21 comments