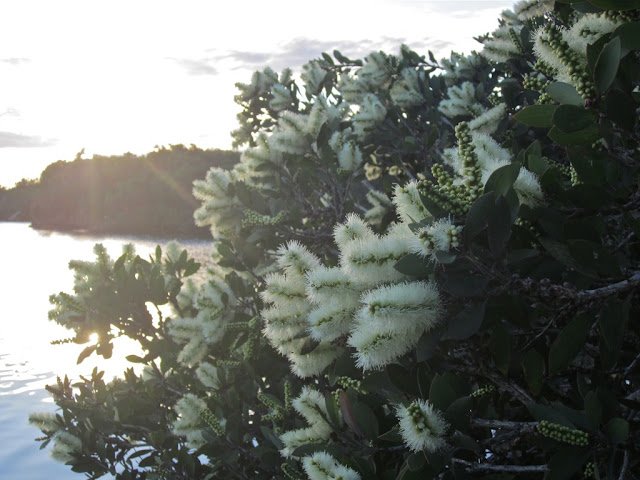 "I took that one for you" says Master J (17) as I marvel at it's beauty. Master J has had the last two and a half days away on a Duke of Edinburgh hike with a small group from his school. He took this photo early this morning, they had camped by a coastal lake last night. I was impressed, and touched.

Yesterday morning he caught the sunrise on a beach which they had camped by.

Identical minor edits only, no cropping or straightening - he has a good eye! 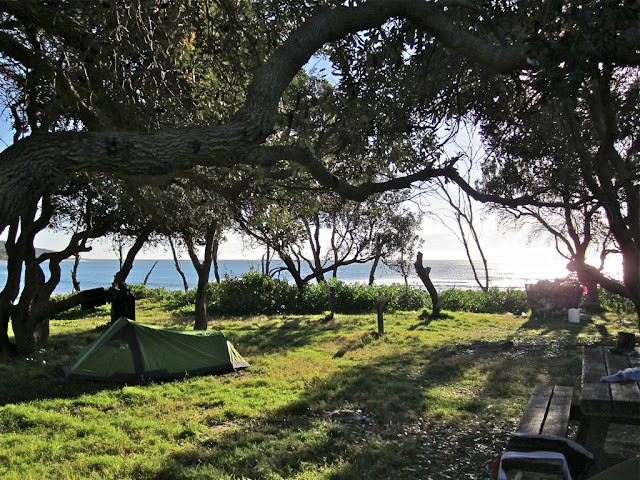 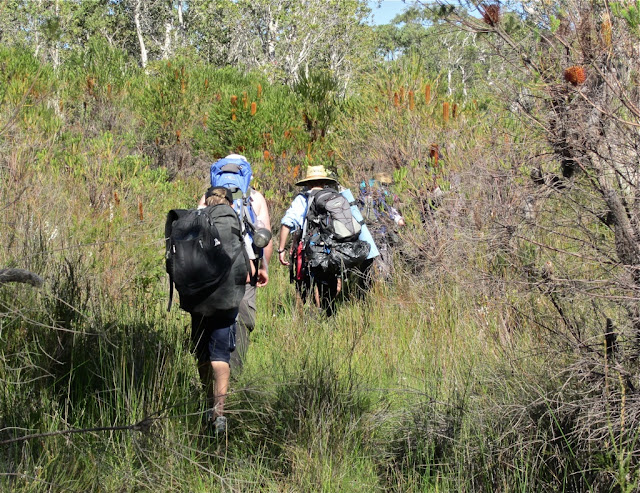 Then they headed off for another hard day of walking where no tracks existed. 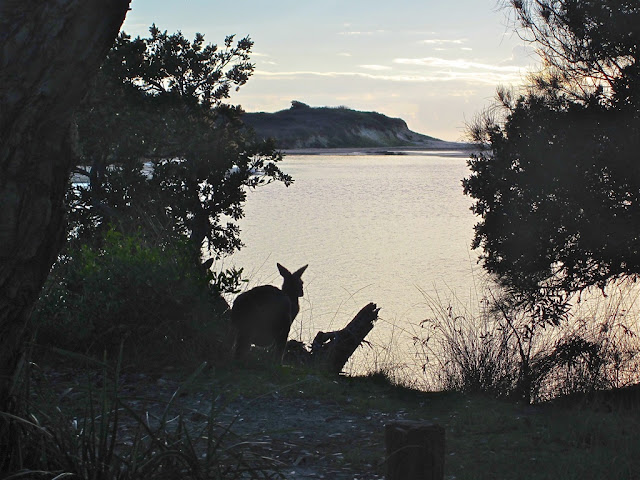 His last photo, taken early this morning before he packed up camp, a wallaby overlooking the lake.

He came home exhausted, with multiple scratches on his legs, in need of a shower, clean clothes and home cooked food but very satisfied. He hopes to join their next camping trip sometime after winter.

Sharing at SkyWatch Friday.
Posted by Karen @ Pieces of Contentment at 5:37 PM

He obviously has inherited your talent!

He sure have your photographic eye. The last one with the wallaby is really stunning. Well done master J.

Your son is just like you. Fantastic photographer. Your flowers on your post before are also breathtaking again.
have a nice sunday
marijke

Wonderful photos Master J - very well done. They convey the whole atmosphere of the trip. The wallaby by the lake being a fitting climax.
He has learnt your talent Karen, for taking timed photos with those wonderful sunrises.
The Duke of Edinburgh award is a great thing for young people to do.

Awesome photos! And where could your son have gotten that "good eye" from???

Gorgeous photos. He must have seen his Mother at work and learned well.

wonderful morning and so beautiful shots !
amazing colours ! how gorgeous is the world !

He does have a great eye & a gift like his Mum. How lovely to take a photo for you.

ohhh what e nice sunset!!! Lovely....i miss the see and beach soooo much!!!!! Hopefully in september we can go to corsica ( its a tiny little island in europe..) Lots of love Sarah

The shots of the sunrise are breathtaking!

Thank you for visiting my blog. Those 1,000 fingers are real. Not sure if they're mutant, hihihi but they sure are a unique specie of plant. Take care, Farida :)

Stunning photographs, beautiful country, i think he has inherited your talent!!

I do so agree with the others, Master J has most definitely inherited your talent plus he has a great eye! These are really awesome, Karen!! Hope all of you have a great week!

I had to agree with everyone - Master J has done a fine job on these photos. They are very pretty and the scenery is awesome. I feel like I am experiencing Austrailia without even being there. Thanks to you and Master J!

Love the first bush. Such a sunset serie is also a good idea.

Lovely hoots! So neat to see a wallaby in a natural setting! We only see them in zoos over here!

Auto correct played with my words... Above comment should read, " Lovely PHOTOS!"

What a great job he did! He has an eye for a shot.

what can i say that everyone else hasn't already said??!! well done, Master J!! ^)^linda(iowa/usa)

Wonderful photos from your son!

the colour of the sky are magical! I love the last shot too, wish u a happy new week:-)

No doubt he has inherited your photography skills! What a beautiful job on all the photos. :)

Great sequence of the sun setting. Loved it, that's a very original way of showing the sunset.

I hope he was suitably enthusiastic about the whole thing :D it was AWESOME!!!! :D

Hi B of GPT. Yes, he had a great time and would love to go again!

Wow, these pictures are so beautiful...you are so lucky to have this experience in reality.
Greetings
J+C

What a wonderfully thoughtful son. And wow, he has talent!

Beautiful. What an adventure. Being in America, I can't imagine seeing a wallabe out and about. Then again, my son had German roommates who were amazed by an armadillo. :)

the sunrise shots are absolutely beautiful--couldn't take my eyes off them. Master J is a great photographer.

glorious way to start the day, thank you for sharing these beautiful photos

He indeed did such an amazing job with the camera! Excellent shots!

Wonderful series! The sunrise is gorgeous and I love the wallaby near the water. Looks like a beautiful spot for camping. Great captures.

What a wonderful trip for Master J....looks like he got a lot out of it! How lovely to see a wallaby on the bank! So different from a wild creature we might see! And Master J is quite the photographer! A chip off the old block! I know you are proud!