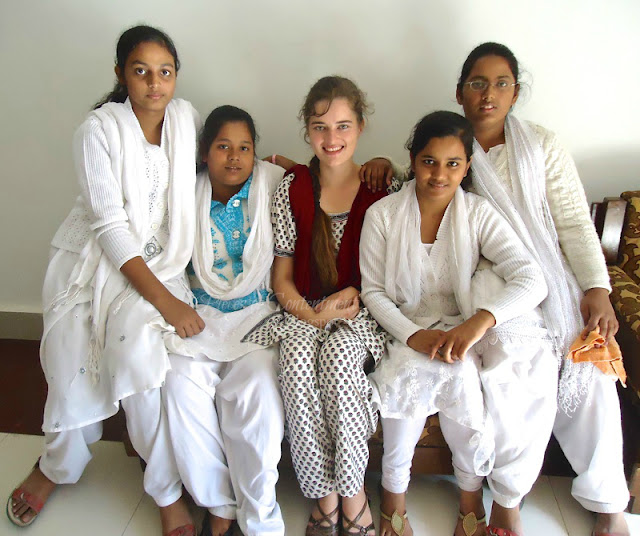 Miss E (20) was quite nervous about going to India, the other four members of the team were over 50 years old. She knew from her last trip five years ago that there would be many challenges and she wondered what she would have to offer. She had felt God was prompting her to go and so she said "yes" on the day the tickets had to be booked.

She need not have worried.....she was welcomed with open arms, particularly by the teenage girls who were amongst the dozens of students who stayed in a hostel to be close enough to attend the schools. We didn't even know a hostel existed before the team arrived. The girls "adopted" Miss E and she would love to return again to have more time with them and the younger children also. 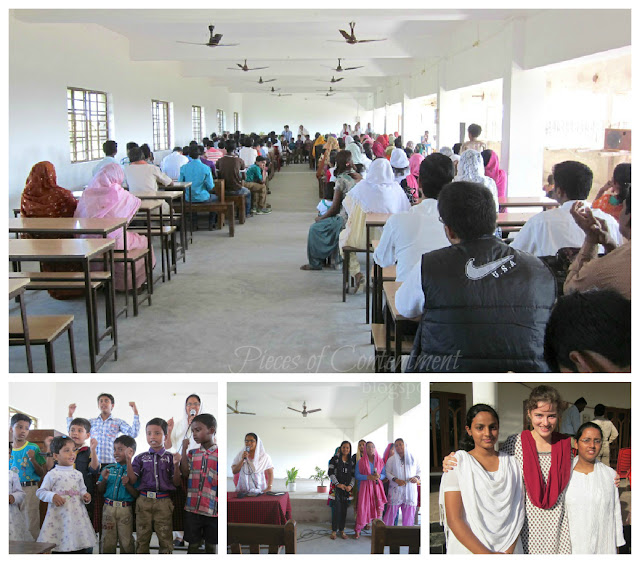 The team each had opportunity to speak at a conference for new believers from the region which was held over a long weekend. As is often the way, those who went to help received far more than they were able to give. 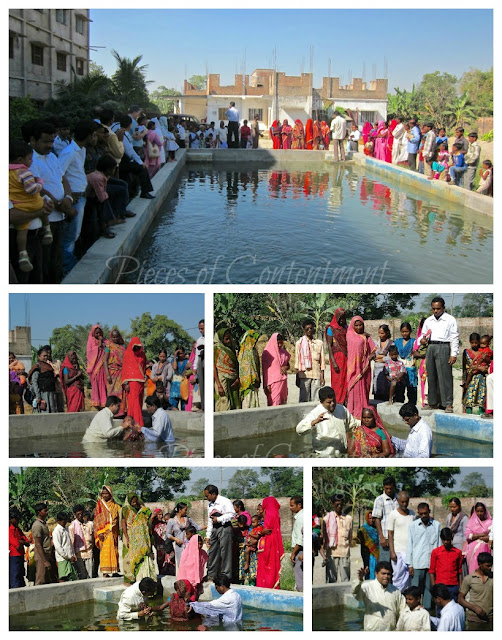 There was opportunity for new believers to be baptised on the Sunday morning. It's quite common the world over for new Christians to be baptised, however in India, this public declaration of your faith can have huge implications. India is primarily a Hindu country. Converting to Christianity can bring much persecution from friends, neighbours, authorities and family. It's not uncommon for Christians to be totally disowned by their Hindu families. 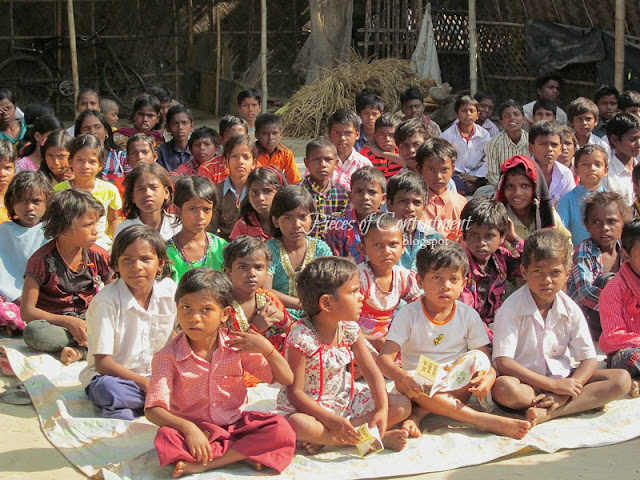 Over the following few days the team was included in activities in some of the remote villages. Here we see the children gathered for a special day of teaching and their feeding program. 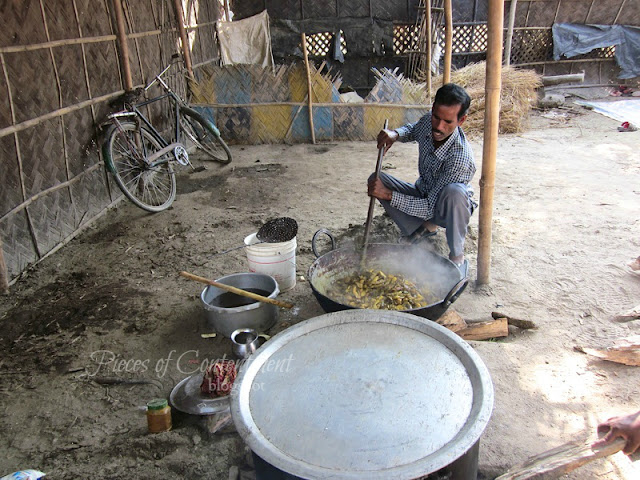 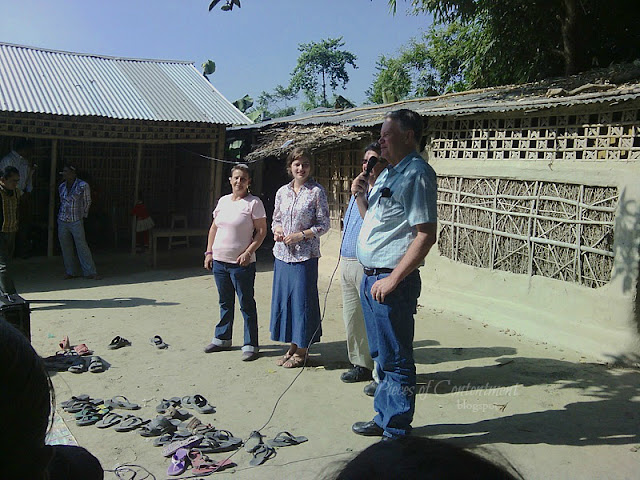 The team sharing. There is no electricity in most villages. J has a portable battery-powered PA system. 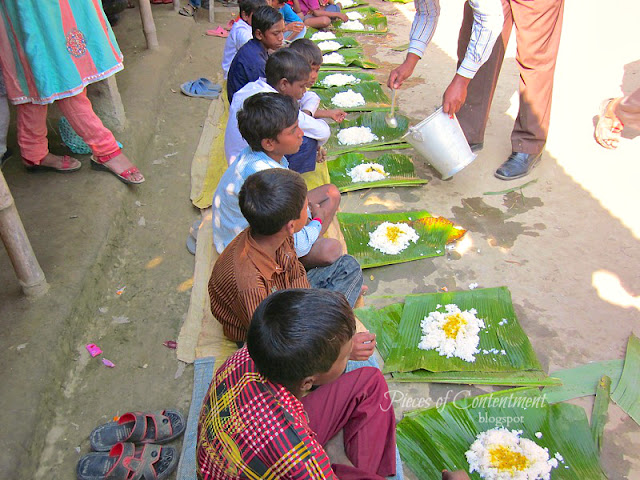 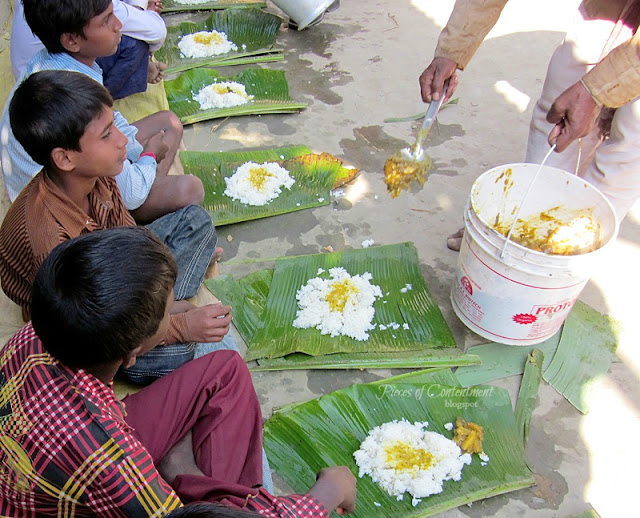 In many of the poorer villages families struggle to provide even one good meal a day for their children. The feeding programs serve the children a healthy lunch as well as some education. This one is rice, dahl (lentil stew) and vegetable curry - served on two banana leaf pieces. 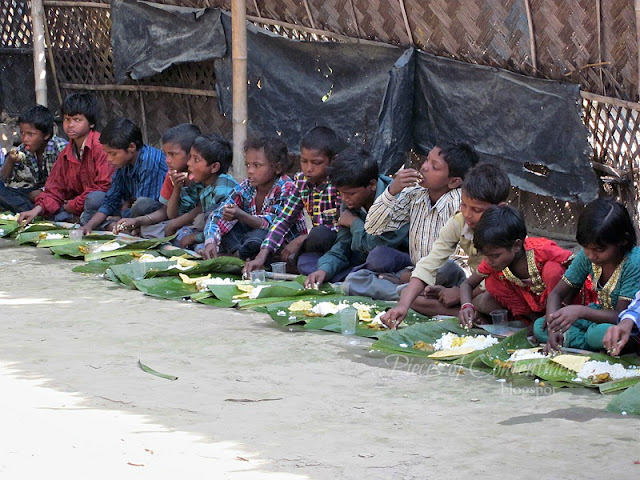 Most Indians eat with their fingers, right hand only, just as these children are doing. 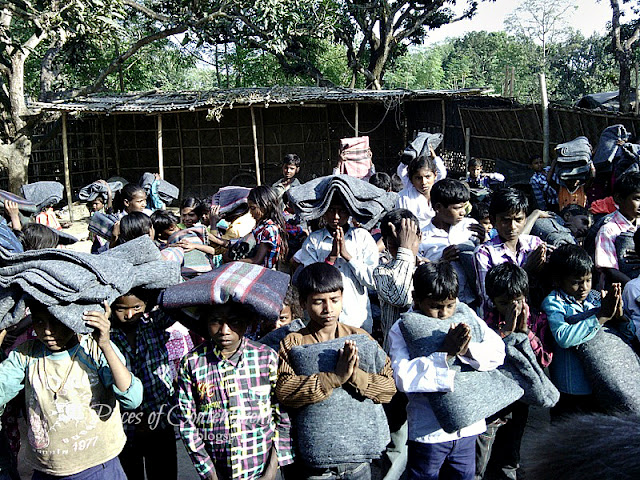 After the meal each child was given a blanket for they are entering their winter. J had the team members distribute the blankets, even though they had been sponsored by one the English-Medium schools which he established and directs. It was an honour for the team to be involved.

Thank you for following this Indian adventure. In creating each blog post with photos from two cameras and a phone camera, I've gradually been able to piece together more of what happened so as to share with others, make a record and also to make sense of the whole experience.

Posted by Karen @ Pieces of Contentment at 2:24 PM

Love your photos and story! Thanks for sharing, you can tell the people and children are very touched by all the love, blessings!

Wow, I don't think I've ever been the first one to comment on a post of yours!
It was touching to see these pics of the trip to India. I'm sure your daughter will never forget the many impressions of this experience. The Lord will use it, I'm sure in her life.
What a needy country...as are so many. We'll be returning to Brazil in 4 wks.

Ok, so someone posted the first comment as I was writing mine, ha. No problem!

Such a wonderful program and a wonderful experience for those that go to India as well as for the people they work with in India!! I have many friends in India and I'm certain they are appreciative. Such excellent photos! Thanks for sharing, Karen!

Looks and sounds like a great time of sharing and learning.

Thank you for sharing this journey.

Thanks for sharing this Karen. Well done the way you displayed the photos too to reduce space - Dave

It must be a fantastic experience, we have never been in India but it attracks us.

I love seeing all the pictures and hearing of their time in India. Beautiful to see the lives that were touched and ministered to. My oldest will be leaving for a missions trip to Africa at the end of this year.

It is quite impressive what you are doing! Good luck and continued success :^)

I welcome you very warmly.
I am impressed with your article.
Your daughter has a lot of experience of traveling to India.
In Poland we also hear about the persecution of Christians.
Often makes offerings to the missionaries in India and other countries.
Next week will be the victim on a mission in Ukraine.
I send greetings.
Lucia

Widać, że pomoc jest im potrzebna. Korzystają z niej. Nie rozumiem czemu religia tak potrafi dzielić ludzi, przecież to ich krzywdzi. Pierwsze zdjęcie jest bardzo miłe. Pozdrawiam.
You can see that they need help. Use it. I do not understand why so religion can divide people, he's hurting them. The first picture is very nice. Yours.

The photos are great!

I can imagine it is a brave step to go from Hindu to Christianity in India and to be baptised in public like that.
That picture of the children in a row eating their meal with their right hand really touched me.
It is such a good thing 'the team' is doing. Hope the blankets provide lots of needed warmth.
bye,
Marian

How lovely it is to see young girls from completely different cultures getting on so well.
It is heart warming to see these young children being given some wholesome food and some education. The kindness that they receive will be repaid tenfold when they are older.

This is God's love in practice. Thanks for sharing this touching event.

Thanks Karen for sharing moments of miss e and your husband's time over in India- your friend j is doing some amazing fruitful work, what an inspiration. I can imagine how delighted the teenage girls and young women would have been to spend time in miss e's company and vice versa - she must be so pleased she went.

Miss E looks beautiful in her Indian outfit!
They have done a marvellous job over there!

What a wonderful experience Ms. E must have had. I just love that first photo with her in it. I am really enjoying seeing and hearing about there trip. Very inspiring!

So sad to think of the persecutions of Christians that go on in other countries, and now I fear, in our own. :/ These are wonderful images and I enjoyed learning more about Miss E's trip. :)

I think India is an extraordinary experience.. I've never been, but I heard once you visited, you'll be somewhat transformed forever..

Thank you for sharing with all of us such an amazing and inspirational journey. I'm really enjoying hearing about your family's trip to India. x

wonderful program and marvelous opportunity for your daughter.

very beautiful and interesting shots, I love the vast diversity we share in our world. Your portraits of the people are especially lovely. cheers

Wonderful shots and a lovely story.

That is a wonderful experience !

what an amazing story and great experience for your daughter, she should be proud of herself and for sure has learned/seen a new side of life! thanks for glueing the pieces+presenting them to us:-))

Yeah there is some electricity problem in villages..this is a big problem over here... !
Its great that miss E had a warm welcome and enjoyed it... :)