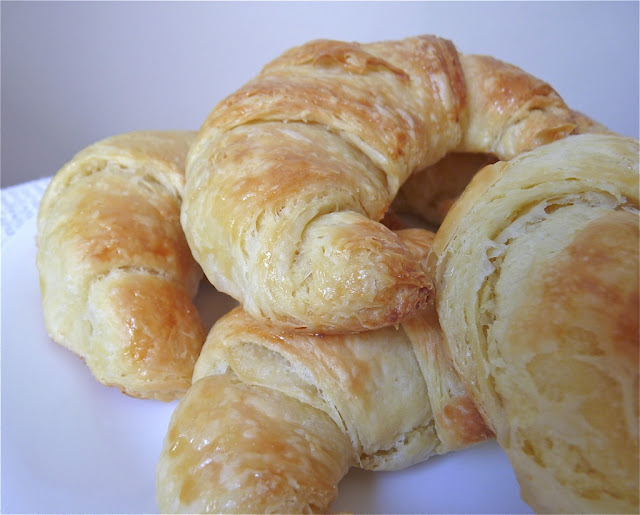 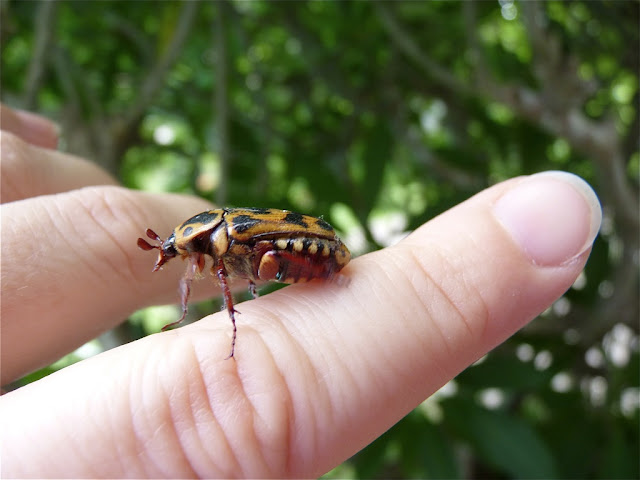 "There's one of your bug friends on the screen door!" I grabbed my camera to investigate. This little Spotted Flower Chafer was inside the house. "Mummy's talking to an insect".....Carefully I pried him off the screen and took him outside where he happily flew away just after I snapped this. 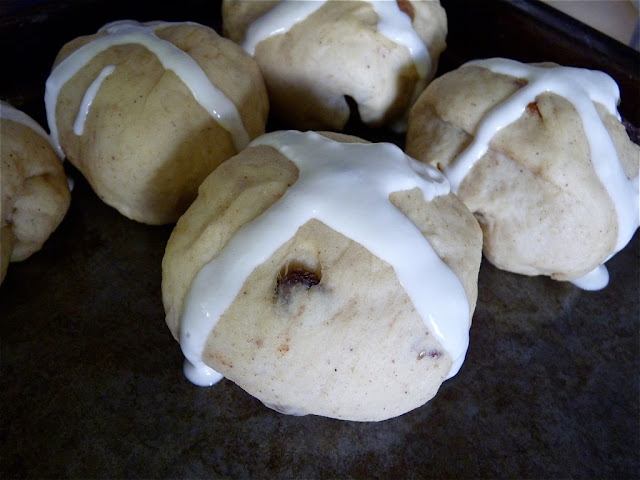 Master T (12) has been very keen to make hot cross buns. Doubling a recipe from a rather old book, he had to convert the measurements from imperial to metric. I caught him half way through and discovered he had no intention of reading the instructions, instead he was just adding all the ingredients to a large bowl. Too late to do anything else, I left him to the mixing and kneading. With a little instruction from Miss E he made two and a half trays of jumbo buns, crossing them ready for baking. 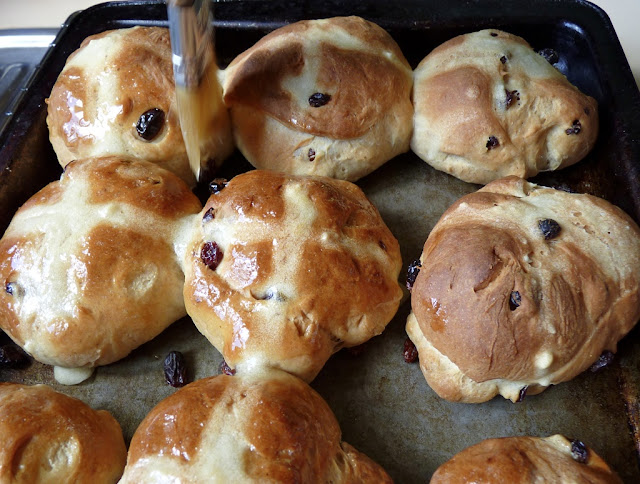 He even made and applied the glaze to make them look and taste even better. 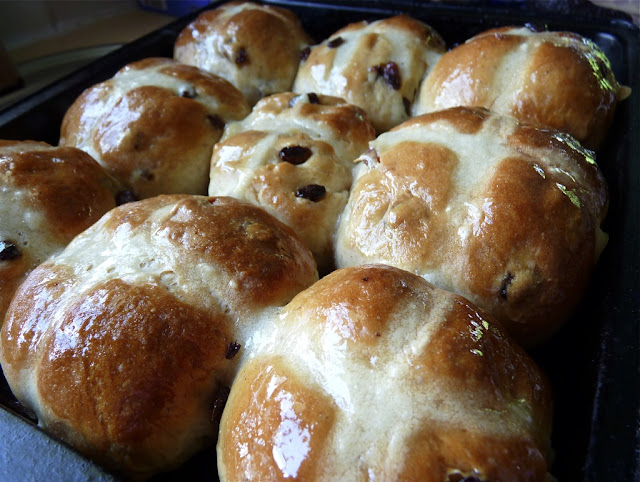 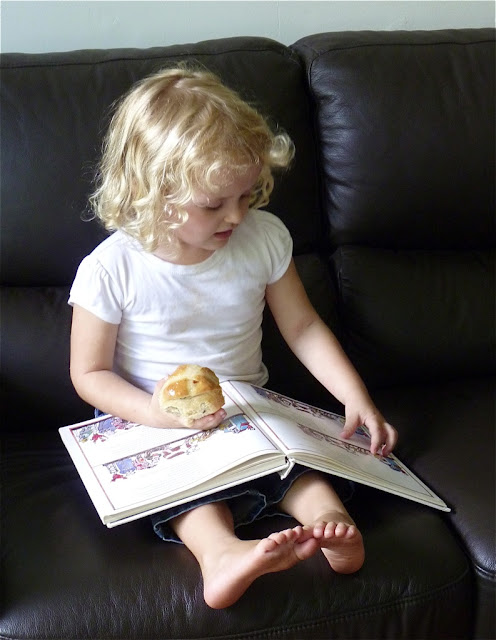 They were a hit with everyone! 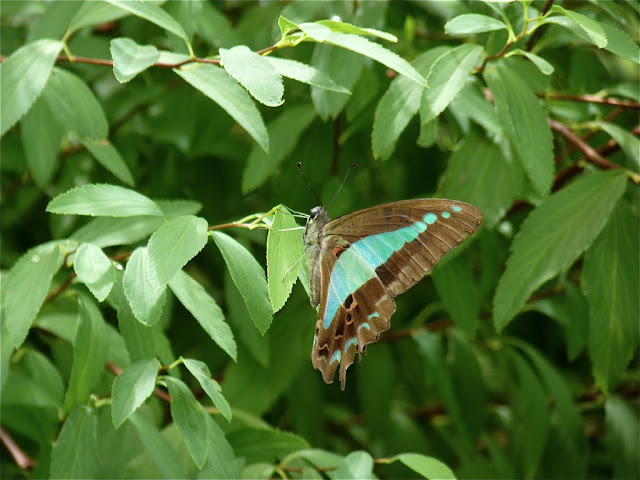 One of the other delights of my day  - finally capturing some shots of this lovely "Blue Triangle Butterfly" which I have seen flying around our yard recently. Love the colours! 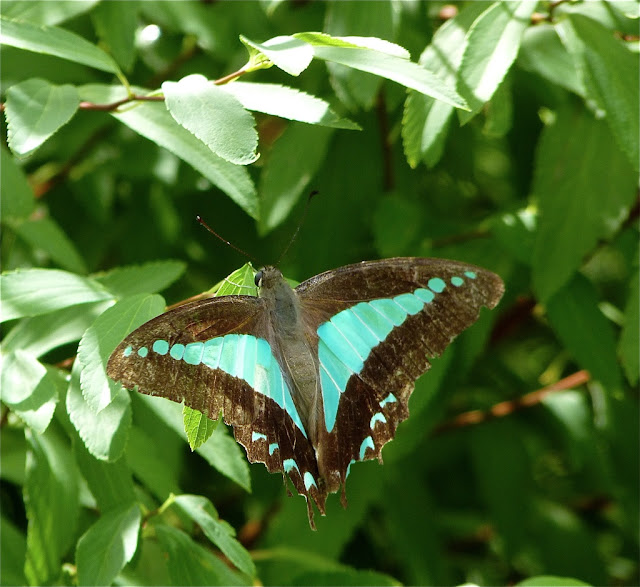 This one looks like it's seen better days, yet it's still very beautiful.

Hope you are able to find something "delectable" in your day too!

Posted by Karen @ Pieces of Contentment at 8:44 PM

Your baked delights look awesome!!! I cannot believe your daughter baked those croissants. I got to learn someday. For now we are content with the ones from the bakery..:D

Wonderful post and your photos make me want to come to Australia for breakfast. What a lovely butterfly also!

These croissants and buns look delicious - this, a cop of coffee and a walk in the garden with the butterflies - perfect morning picture!
have a great week-end.

WOW!! Miss E has a real gift. Is she studying this year or working? Looks to me like she would make a great chef. They look delicious.
Young Master T did a great job with those Hot cross buns too. You have a talented bunch there.

And of course, your garden shots are always a delight. I would love the opportunity to photograph butterflies & bugs like you do. Sadly we don't really have a garden to speak of. I miss my old yard with all the trees & flowers.

How do you make food and insects together on one page look so good? Only you! The croissants look divine! Love these.

I think Master T is a very talented young man!! The buns and croissants look delicious and I haven't had breakfast yet, so I'm drooling. And what interesting bug and gorgeous butterflies! I love their colors! Delightful post as always! Wishing you and your family a great weekend!

The bread lookes jammy!! I am just back home from work and I am hungry.
The butterfly is a beautiful artwork from mother nature. Well captured!!
Have a nice weekend
Marijke

The bread looks fantastic. But it must be a lot of work.

Your baking looks absolutely delicious. Thanks for stopping by to comment on my blog post about Yaktrax. Do you get any snow there? - Margy

Both the croissants and hot cross buns looked absolutely mouth watering. What a wonderful thing to have kids that love to bake!
The chafer beetle was interesting but the butterfly beautiful.

Nothing better than homemade croissants and hot cross buns. Yummy.
Lovely captures of the butterfly.

Oh - those croissants made me drool! :-)

The croissants and buns look yummy!! The little girl on the sofa is so cute!! Have a good weekend!!

Rogaliki i bułeczki wyglądają smakowicie . Motyl jest przepiękny, a biedronka jest pewno wdzięczna za oddanie jej wolności. Pozdrawiam. *** Croissants and buns look tasty. A butterfly is beautiful, and the ladybug is certainly grateful for the dedication of its freedom. Yours

absolutely delectable...now makes me crave for some buns and croissants myself :)

also, i'd really appreciate if you could contribute for Saturday Sareenity.

have a great weekend,
cheers!

hmmm, feeling hungry all of a sudden! what beautiful colors for this butterfly. Have a good week end!

Well I am not sure which I think is more delectable, the hot cross buns or that lovely butterfly. Both are great. Happy Eating!!

Your post is making me hungry. Everything looks so good.. And that butterfly is amazing. I have never seen one that color before.. Hope you are enjoying your day..

Oh can you please send me some of these YUMMY YUMMY selfmade pastries? And also the wonderful Butterfly?

Your croissant and buns look delicious! What a wonderful collection of photos. The insects and butterflies are butterfly and your little one is a cutie pie. Great post, Happy Sunday!

Wiem, że masz nowy post i że są tam kangury, na które od dawna czekałam u Ciebie. Niestety nie chce się u mnie wyświetlić :-(. Pozdrawiam *** I know you have a new post and that there are kangaroos, which have long been waiting with you. Unfortunately not want to me show :-(. Yours

Catching up on your blog, after being away for a bit. Love this little butterfly. The coloring and pattern is so pretty.

the picture of the blue triangle butterfly is wonderful...