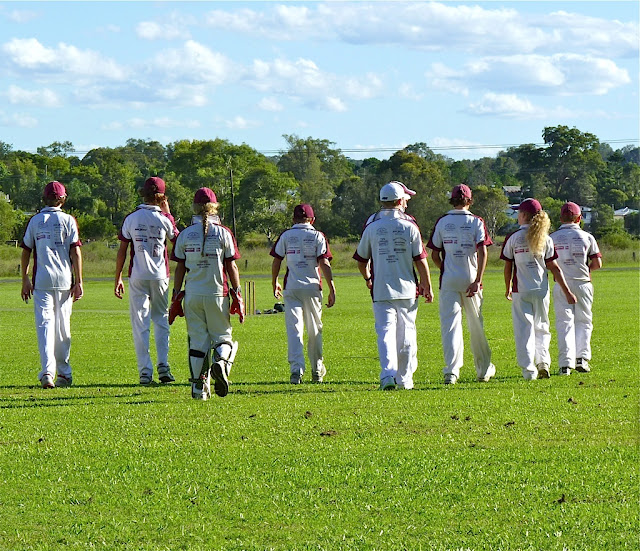 Last week was Grand Final week for the Junior Cricket comp in our valley. Played Thursday and Friday afternoons from 4 to 7pm, the top two teams in each age division played for this season's premiership. Our  "Terrific Trio" love their cricket, the twins being the only girls in their team. 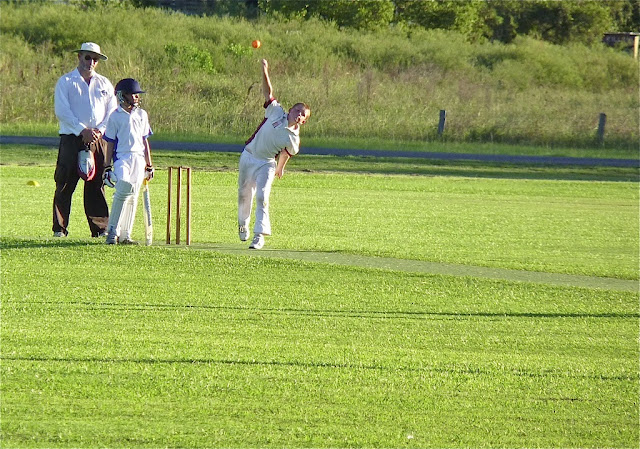 Master T is a valuable spin bowler, just as his older brother, Master J (17) is in the men's/senior's comp. 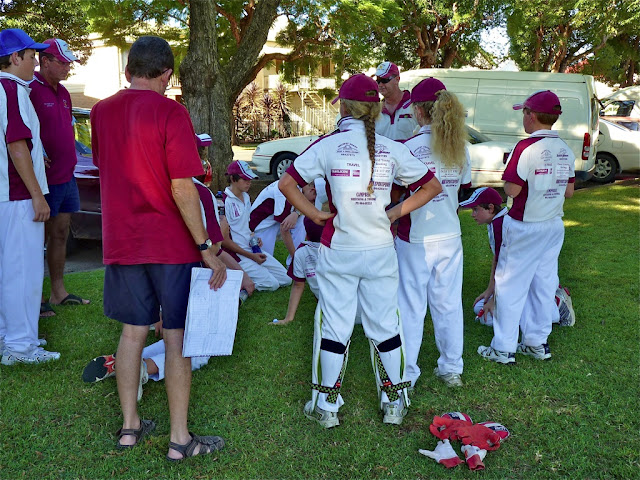 Two "drinks" breaks gave the players a chance for a quick drink and for each coach to encourage his team. Even though we are three weeks into our autumn, it was still over 30C when they started at 4pm on the second day. 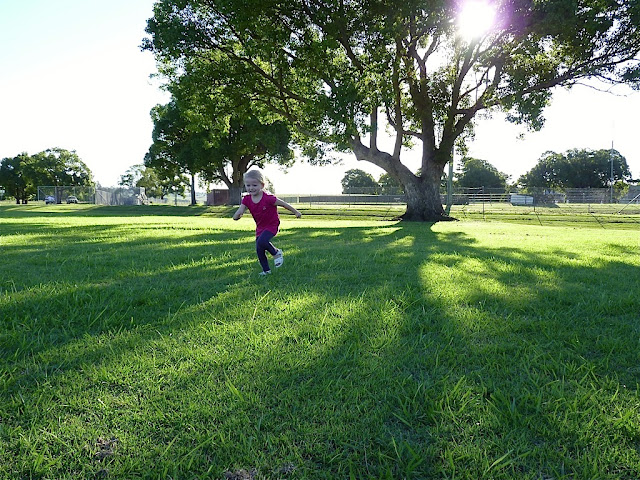 Miss E (4) and I aren't so keen on sitting still for hours....so she had me take photos of her nearby running as fast as she could! 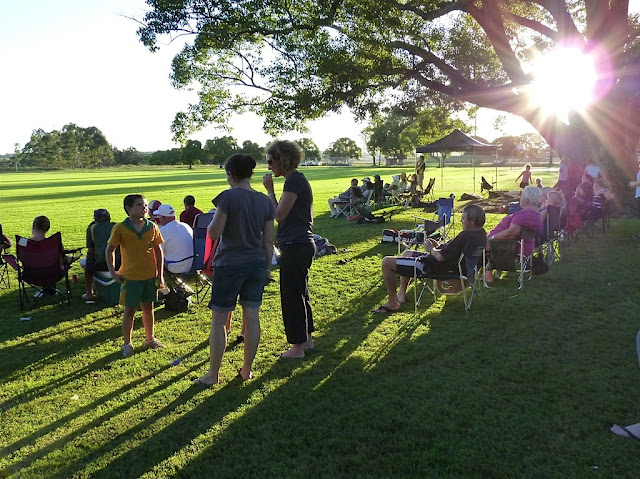 Most the parents, some grandparents and friends came to watch and support their youngsters. Aussies are generally keen spectators, many of the men enjoying a cold beer or two (or more) while they sat in the shade as the sun sank low. 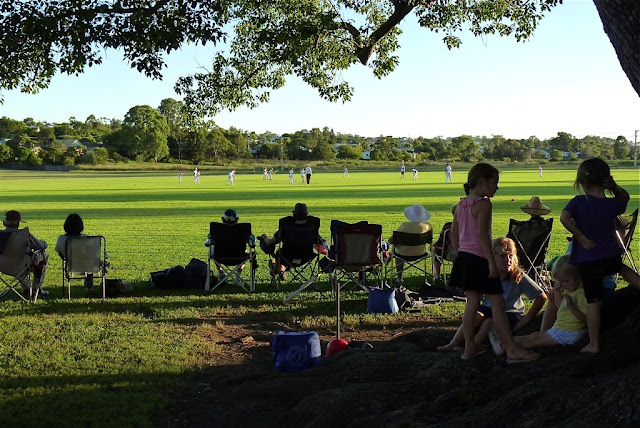 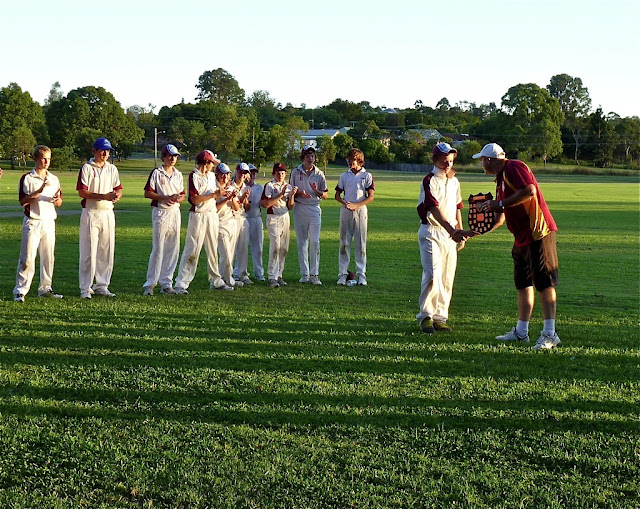 A convincing win was a great way to end their season. I do believe all the players and spectators enjoyed the afternoon, it was exceedingly pleasant to be in our great outdoors as the week came to a close.

Update: The Editrix (Miss E senior) has correctly commented that there were two more girls in the team but neither played in the grand final. You can tell I'm not a regular spectator, I'm more of a taxi mum.

Posted by Karen @ Pieces of Contentment at 8:20 AM

It certainly was a lovely afternoon!

There were actually a couple of other girls in the team this year, though neither of them played in the grand final.

A wonderful afternoon for the whole family! I bet the kids really enjoyed themselves!

Wow, it is still very hot where you are. Thanks for sharing this great story about the champs.

Wow you are so sweet! I was in Australia years ago and remember these scenes very well on weekends. But when i read about you you had 8 kids, that is super exemption, amazing mom. I know the average children there are 2, you should have a mother's award. And your youngest is so very pretty!

I especially love your first photo...I want to hear 'We are the Champions' by Queen as they walk on. When my son played baseball as a youth, it was always so wonderful to go and see him play. These photos reminded me of those days.

A great photographic record of an enjoyable day. For me the best of the lot was Miss E running so fast!

What a perfect, fun day for all of you! Delightful captures as always and smiles for the rest of us!! Beautiful! Hope your week is going well!

Looks like so much fun. Lovely afternoon . The light is so striking

Nice to see parents and grandparents enjoying the game...looked like a great afternoon.

everything so green and sunny! so nice!

What a pleasant way to spend a sunny afternoon.

i love your photos---the green, the afternoon sun, the kids enjoying themselves. a wonderful way to spend an afternoon.

Great series of a memorable day.

Love that 4th one- the perspective with the tree is great!

Love the picture with the sun in the tree.

I love how the teams are a mix of girls and boys. Here in the U.S. the teams are either boy or girl for baseball. Hope you have a fantastic week.

Looks like a fun time! All great photos, but the fourth one is my favorite!

This is definitely something we don't have here! Wish you a good day :)

congratulations on a great win!

Love one of your girl's stances during the drinks break - she looked like she was completely on top of the situation! Glad you all had a good time.

congrats to the girls!!!

Lovely pictures of life. It all looks so civilized.

Great shots and lovely end of session for the players. It is so green there, I love looking at your photographs for that reason alone. :)