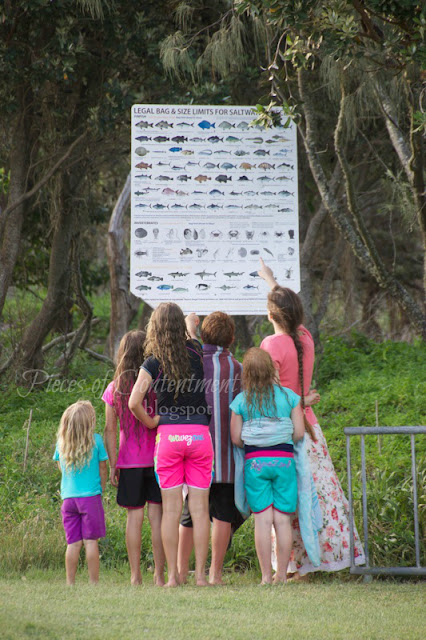 While some children have imaginary friends, Miss E (4) has an imaginary species of animal - SHWOGS! Now let me tell you a little about this elusive species. Shwogs live in the ocean and our salt water pool, they are usually about 50cm/18" long, although last November there was a report of one almost as big as a blue whale while baby shwogs are as small as jelly fish. All shwogs have small ears and sharp teeth. Mummy shwogs are light blue and dark blue, daddy shwogs are red and yellow while baby shwogs are colourful all over. They are mostly friendly, especially the mummy shwogs and baby shwogs, and have the ability to become invisible while people are looking for them. Is it any wonder no one but Miss E has ever seen one????

We have known about shwogs at least since we stumbled upon a Wobbegong just over 12 months ago. Don't laugh, there really is such an Australian animal as a Wobbegong, also known as carpet sharks. You can see my photos of the one we almost trod on here. Every now and then we here reports of sightings and adventures of shwogs, long may they last!

Let me share some photos of less elusive animals from the last week or so....... 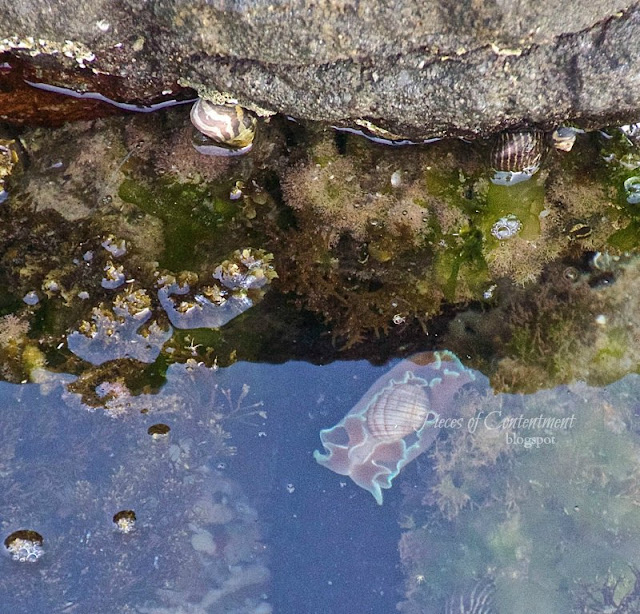 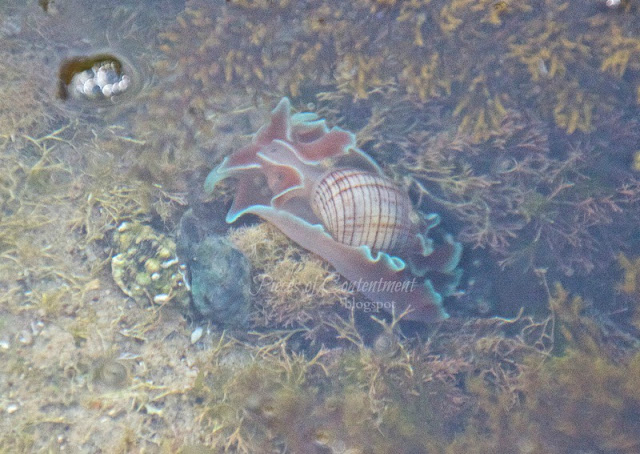 A beautiful sea snail - I had never seen one of these before. In the top photo the sea snail is moving over a sea cucumber. 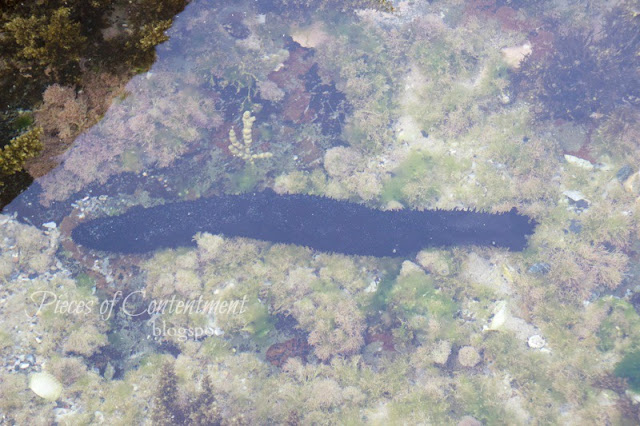 Here is another rather large sea cucumber, about 50cm/18" long - about the size of a shwog! 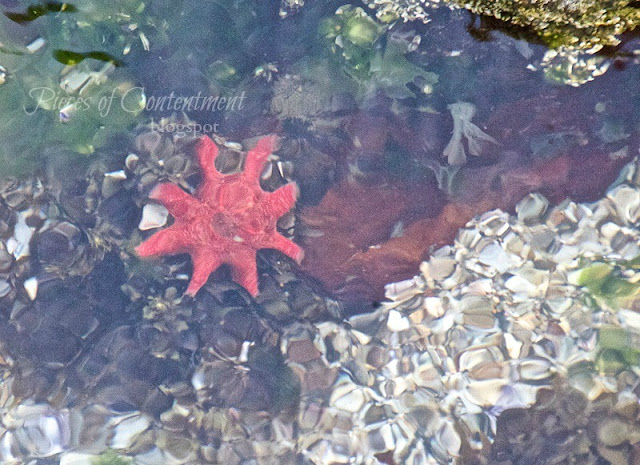 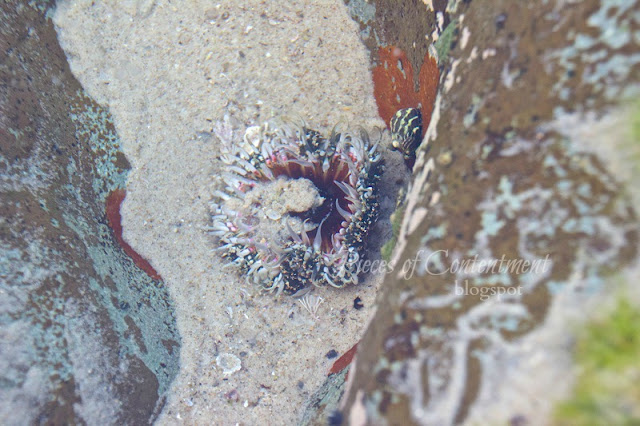 Some sort of sea animal in another rock pool. 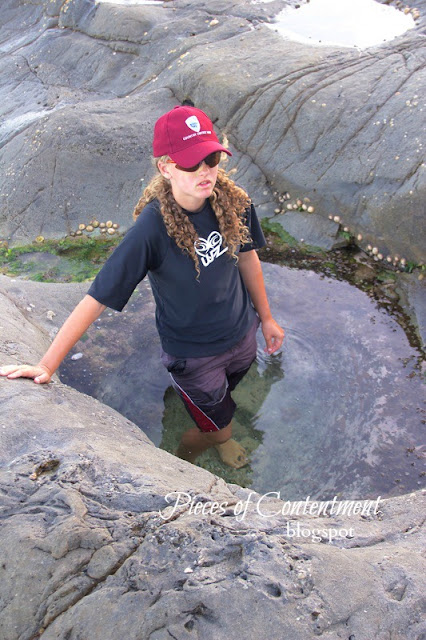 This was the largest creature I found in a rock pool! 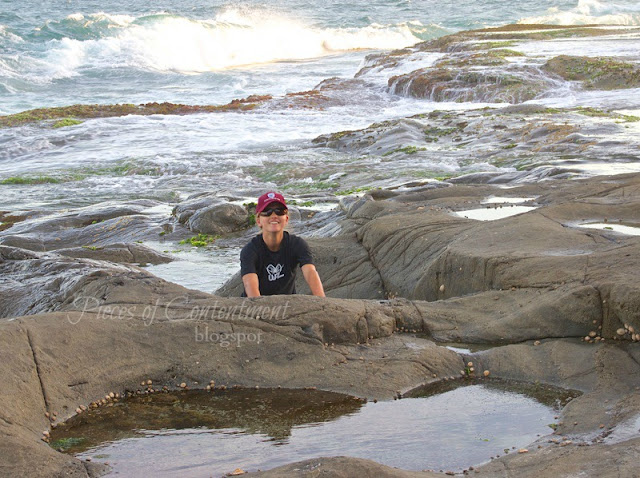 PLEASE hop out of there!! The tide is coming in!!! 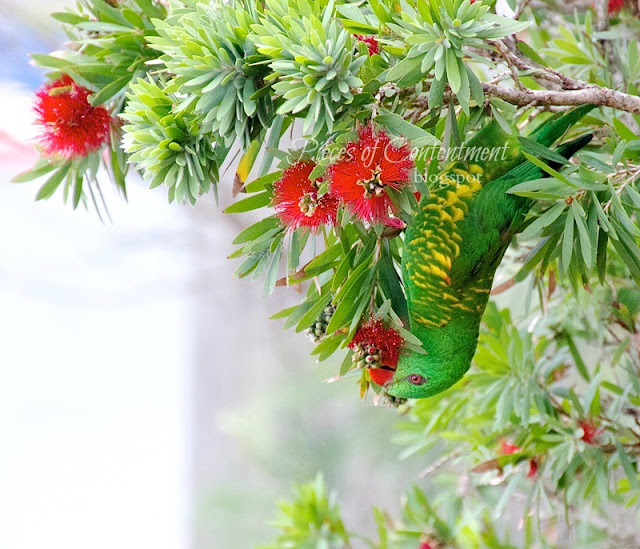 Back on dry ground, my parents in law front yard. This is a Scaly Breasted Lorikeet, an Australian bird, feeding on a Little John Bottlebrush. 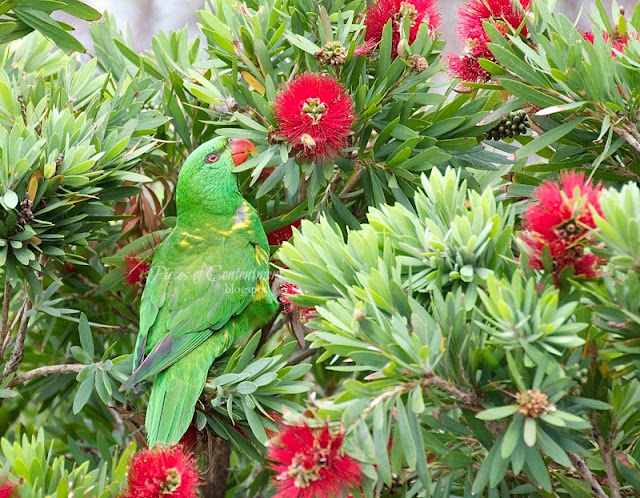 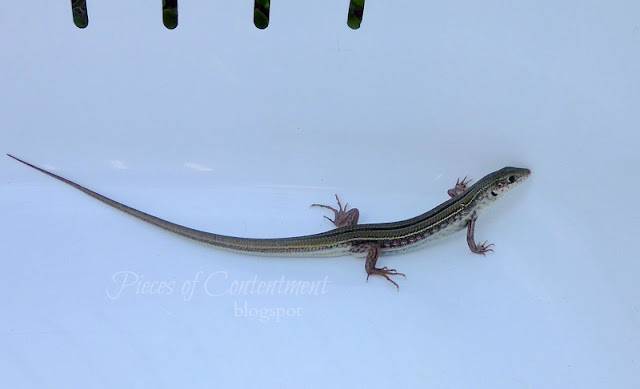 In their backyard a resident skink became stranded in our washing basket...... 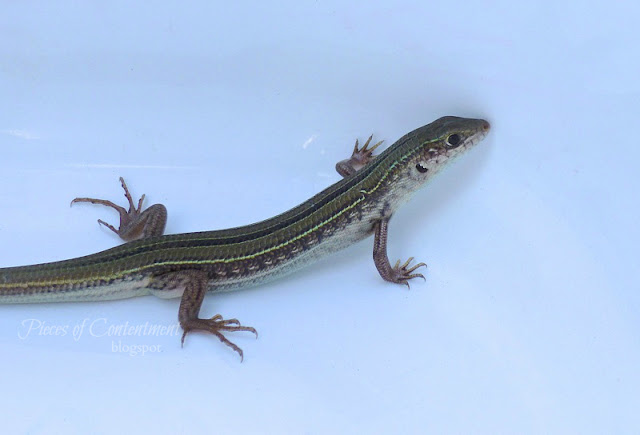 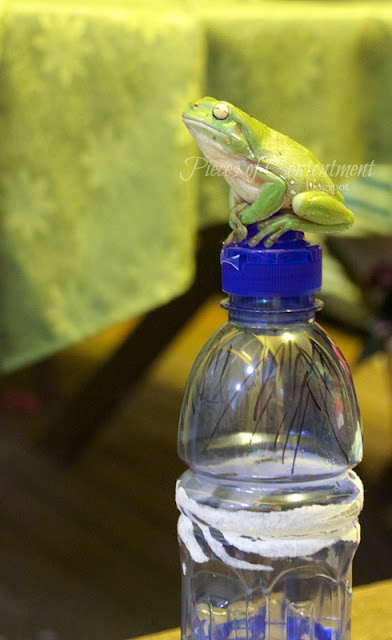 Once home, a resident Green Tree Frog wanted to spend the night atop of Master T's drink bottle! 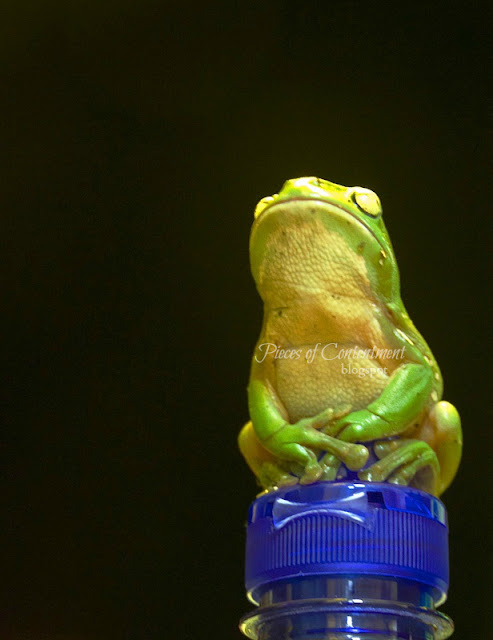 He was eventually persuaded to move on, but not before I took this photo!

Quite  few creatures, thankfully most are not as shy as shwogs!

Posted by Karen @ Pieces of Contentment at 9:54 AM

where are these tidal pools?

Such gorgeous pictures again Karen! So very colourful and so many different and colourful animals and birds and trees, it is amazing! Thanks for this peak into your Australian colourful world.
Marian

lol!!! LOVE the shwog tale. :) What fantastic photos of the frog! Sure would love to visit those tidal pools.

I haven't visited in a long time...looking at your blog makes me feel like I'm on vacation! I'm going to make some hot chocolate, grab a blanket and keep reading! Beautiful photos!

Wonderful photos of these very interesting sea creatures... even the big ones in the pond. What creations God does make.

Such a fun post with all the delightful critters! Wonderful captures, beautiful flowers and colors and tangible fun for all -- regardless of how far away we live! Thanks for sharing, Karen!!

Children have such amazing imaginations! The photos in the tidal pools are great and I really like the Scaly-breasted L.

Oh! Just so fantastic!! What a marvelous post...thank you!!

I will be sure to look out for schwogs next time I go for a swim!

Beautiful pictures. I love going out on low tide and looking at all the beautiful creatures. I remember finding a turtle once, as a little girl, and my siblings and I all patting it's shell.

Loved your story and photos! Thanks for sharing the beautiful sea creatures and lorikeet. We've fed them many times at the Australian section at our zoo. Love it!
Not sure how I would react to find a skink in my laundry basket...the worst thing I find is an occasional brown ant! :)

Thank you for the warning email - that was a classic last photo, well at least in the two milliseconds I saw it for. That's hilarious (but not hilarious if it had have been my drink bottle) that you've captured this. My very VERY favourite if that first shot in this post - you have to do something with that photo.

These photos are just amazing. I especially love the one of the sea snail, never seend anything like it and so pretty!

I can't find enough good english words to say how beautiful your pictures are! Gorgeous, is that a good one? I will show the photo's to my children. They love animals and will be amazed by the bright colors of the animals in Australie! The frog on the bottle! :-)

Got to love Australian wildlife - well, at least the ones that wont kill you anyway!

Cheers and thanks for linking to WBW - Stewart M - Melbourne

I love all your wildlife, the sea creatures are neat and the lizards and frogs are cool. And of course I love the Lorikeet. Great post and lovely photos.

So many wonderful critters, love the green bird on the bottlebrush plant and that darling little frog. I'll keep a look out here for shwogs, but I think it might be too cold here for their liking.

Your photos are excellent.
I never saw these animals in the wild.
Are interesting.
Regards
Lucia

That last shot is fabulous!!! And what a weird and wonderful find!!! He looks quite haughty...like..."this is my perch and you can't have it"!!!

I've never seen a Shwog but glad to have such a good description just in case! (I don't suppose I'd meet one in the snow?) Love the macro frog!

Oh my goodness, so many fascinating creatures! Gorgeous photos, as always. I hope you catch a shwog one day soon ;)

There are so many wonderful photos here but I am mesmerized by the Green Tree frog on the water bottle. It is sitting as posed and composed as a Buddha :) What is the chance of getting a photo like that!

Love, love, love seeing all these amazing and interesting and beautiful creatures! Thanks so much for sharing! :)

Awesome photos of the tide pools Karen. So many colorful creatures. I didn't see the Shwogs though :-(

Love the Scaly Breasted Lorikeet and especially the Green Tree Frog. Also, your kids are beautiful! Thank you for sharing your world.

As always, a beautiful collection of images. Being a bird lover my fave is the Scaly Breasted Lorikeet. We have the bottlebrush plant here but not the lorikeets. :(

cute, the little one! love the flowers, I need to buy some for inside the house, we still have snow around..

What great images, from the wading pools with shells to the birds...glorious birds, all really wonderful!

Oh I LOVE all of those creatures! Great captures!

Love creative kids! That little frog is too cute, too.

gorgeous - such a beautiful, beautiful place you live in. Jealous a little bit ;-)

Amazing photos! Love all the critters, such lovely creations of our amazing God.

I absolutely love the story of the Shwogs!
Lovely series of images, Karen! Those rock pools look wonderful. We really do have a wonderful coastline!

Once again amazing photos. That little frog look so cute up there on that bottle.

Nature is so beautiful and so is the imagination of children. Life is so wonderful!

the kids and i smiled when we saw your frog...he is so sweet, and my daughter wanted to know whether she could buy a parrot like that...lovely photo's..

The nature in your country is amazing! Praise the Lord. Its great.

Well, finding your site was hitting the jackpot for Camera Critters. What amazing and wonderful photos. I, especially, loved the sea snail in motion. All your shots are incredible, though.

My Camera Critters is at:

Wow! Magnificent photos of nature's treasures and such beautiful colors ~

I love everything!! The critters are fantastic and the shots are awesome!!

It makes me want to move there to take pictures!!

Your photos are amazing! I love how rocky your seashore is, and the pools that form with the sea life left behind. I've never seen anything like this.
I almost overlooked the colorful Lorikeet hanging there in the first picture.
The little frog on the water bottle is just too much!
And thanks for visiting my blog!